Researchers at the National Institutes of Health have discovered that a rare cancer of the digestive tract is linked to a shutdown in an enzyme that helps supply oxygen to cells.

In some cases, the enzyme’s failure to function resulted from errors in genes containing the information needed to make the enzyme. In others, the cause could not be identified, but was believed to be genetic. 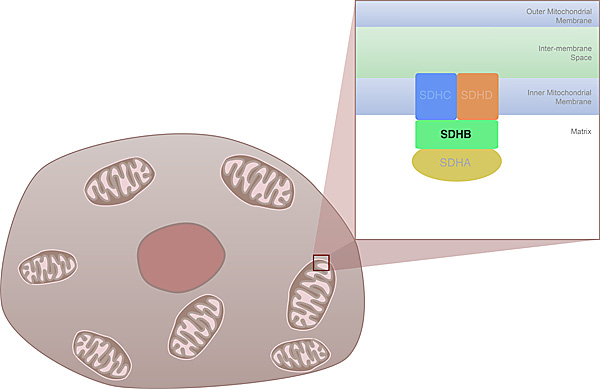 The enzyme succinate dehydrogenase processes oxygen to supply energy to the cell. It is embedded in the outer membrane of mitochondria, cellular structures which supply energy to the cell. The enzyme is made up of parts, or subunits. The researchers found that some patients with GIST had mutations in the genes for the B and C subunits of the enzyme. In other cases, the enzyme failed to function, presumably because of other, as yet undiscovered, mutations.

Gastrointestinal stromal tumors (GIST) are tumors of the esophagus, stomach, and intestines. They occur in cells of the nervous system, which control the muscles of the digestive tract.

Within the last 10 years, researchers have found that the majority of adults who develop GIST have mutations in two genes, known as KIT and PDGFRA. The drug imatinib (Gleevec) is effective in treating many GIST having mutations in these genes. Unfortunately, most GIST tumors that occur in children do not have KIT or PDGFRA mutations, and imatinib is not effective for treating them. Pediatric GIST is very rare, occurring in less than 1 in a million individuals each year.

For the current study, the researchers set out to find genetic causes of GIST among individuals who do not have mutations in the genes for KIT or PDGFRA. The researchers examined tissue from 34 GIST patients for mutations in the genes for succinate dehydrogenase, an enzyme that processes oxygen to obtain energy for cells. The researchers narrowed their search to genes for succinate dehydrogenase because earlier research has shown that mutations in this enzyme are a hallmark of Carney Stratakis syndrome, a rare disorder in which individuals develop GIST and paraganglioma, a tumor that also affects cells of the nervous system.

The researchers found that 12 percent of the GIST patients in their study had mutations in genes containing the information needed to make the up the parts, or subunits, of succinate dehydrogenase. Specifically, the patients had defects in the B and C subunits of the enzyme. Although the remaining patients did not have any of these mutations, succinate dehydrogenase in tissue from their tumors did not appear to be functioning and cellular respiration was disrupted. The researchers believe that undiscovered mutations account for the enzyme’s failure to function.

“Tracing the roots of this disease to cellular respiration has yielded a promising lead on how GIST tumors might form,” said senior author Constantine A. Stratakis, M.D., D.Sc., acting director of the Division of Intramural Research at the NIH’s Eunice Kennedy Shriver National Institute of Child Health and Human Development (NICHD, and one of the researchers after whom Carney Stratakis syndrome was named. “The finding may also lead to the development of treatments for GIST subtypes that have not responded to traditional therapies.”

First authors Katherine A. Janeway, M.D., of the Dana–Farber Cancer Institute and Children’s Hospital, Boston, and Su Young Kim, M.D., Ph.D., of the National Cancer Institute worked with Dr. Stratakis; colleagues at their respective institutions and at others in Miami, San Antonio, Boston, New York, France, the Netherlands, Austria and Ireland; and members of the NIH Pediatric and Wild-Type GIST Clinic. The research also was funded in part by the NIH Office of Rare Diseases, the National Cancer Institute, the NICHD, the GIST Cancer Research Fund, the St. Baldrick’s Foundation, the Voelcker Fund Investigator Award, the Health Research Board of Ireland, the Life Raft Group, the Shuman Family Fund for GIST Research, the Leduq foundation the and the government of Ireland.

The findings were published online in the Proceedings of the National Academy of Sciences.

“Our next goal is to identify the other genes that control the normal cellular respiration process and determine if mutations in these genes play a role in cancer,” Dr. Stratakis added.

The study was undertaken at the NIH Pediatric and Wild-Type GIST Clinic, established to increase understanding of GIST, and its causes, and further new treatments. The clinic, located at the NIH Campus in Bethesda, Md., is supported by the NICHD and the National Cancer Institute.

NCI leads the National Cancer Program and the NIH effort to dramatically reduce the burden of cancer and improve the lives of cancer patients and their families, through research into prevention and cancer biology, the development of new interventions, and the training and mentoring of new researchers. For more information about cancer, please visit the NCI Web site at http://www.cancer.gov or call NCI's Cancer Information Service at 1-800-4-CANCER (1-800-422-6237).

The National Institutes of Health (NIH) — The Nation's Medical Research Agency — includes 27 Institutes and Centers and is a component of the U. S. Department of Health and Human Services. It is the primary federal agency for conducting and supporting basic, clinical, and translational medical research, and it investigates the causes, treatments, and cures for both common and rare diseases. For more information about NIH and its programs, visit http://www.nih.gov.