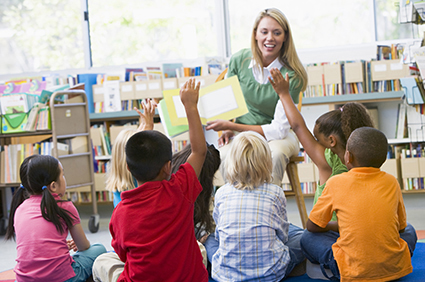 A program to teach preschoolers pre-reading, social, and thinking skills appears to have benefits through third grade, particularly in executive functioning—the mental skills that include planning, paying attention, organizing, and remembering details, according to a study funded by the Eunice Kennedy Shriver National Institute of Child Health and Human Development.

The findings appear in a recent issue of Psychological Science.

Karen L. Bierman, Ph.D., of the Department of Psychology at Pennsylvania State University, and her colleagues developed a program to teach preschoolers the pre-reading skills needed to succeed in school, while at the same time fostering the social skills needed for getting along with others and avoiding conflicts. Called the REDI (Research-Based, Developmentally Informed) Head Start program, the curriculum was developed for use in Head Start classrooms. Head Start is a program of the Administration for Children and Families that promotes school readiness of children under 5 from low-income families.

Along with learning the alphabet and making the sounds that letters represent, the program directs teachers to read to children and ask them questions that get them involved in the lesson. Many of the reading sessions focus on fictional characters learning to control their impulses and overcome the emotional frustrations and conflicts common among preschoolers. Other sessions involve recognizing anger and sadness in oneself and others. In 2008, the researchers reported that by the time children in the REDI program finished preschool, not only did they score higher than their peers on prereading skills, they also did better on tests of emotional and social development.

In the current study, the researchers tested whether taking part in the REDI program would have long-term benefits for the children's executive functioning skills. The researchers enrolled 356 children from low-income families in 44 Head Start class rooms in Pennsylvania. Classrooms were assigned at random to either the REDI program or a traditional preschool program. Trained examiners assessed the children's executive functioning skills when they began preschool, and again at the end of kindergarten, first, and second grade. The children were classified as having either low, medium, or high executive functioning skills based on their scores over time. Each group was further subdivided into a group that received the REDI intervention, and a group that had the traditional curriculum.

"The REDI intervention protected the low executive function group from the decline, so that it was much less than in the control group," Dr. Bierman said.

On average children who began the program with low executive function scores were younger, had lower verbal and nonverbal IQ scores, poorer attention skills, and lower social and emotional scores, compared to children in the other groups. Because they started the REDI program with higher deficits than the other children, the researchers think that the intervention helped them enter school with behaviors more conducive to learning, which allowed them to take greater advantage of learning opportunities than children in the control group. Similarly, children in the low executive function control group may have fallen behind because their lack of initial readiness led them to disengage from the learning process.

Children in the high executive function group who received the REDI intervention scored marginally, but consistently, higher than those in the control group. The researchers theorize that their high executive functioning skills at the beginning of the program allowed them to benefit slightly more than those in the control group. 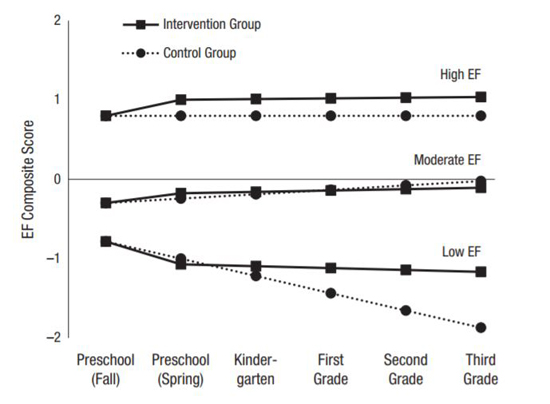 The researchers believe that boosting executive function skills in children who need the most help helps them to focus in the classroom and increases their chances for later success during the primary school years.

"We saw that this enriched preschool intervention can really have long-term academic benefits, particularly for kids who were at the highest risk of having school difficulties because of their low executive function," said Dr. Bierman.