Origins of “timezyme” have implications for understanding sleep, retina disorders 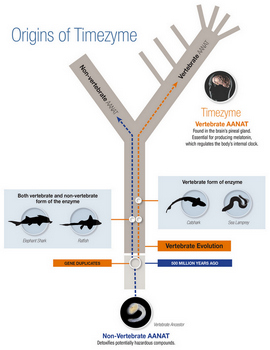 After analyzing DNA from sea creatures thought to resemble early vertebrates, researchers have pieced together a theory of pertaining to the origin of melatonin, which regulates the body’s 24 hour daily rythms. The AANAT enzyme, or timezyme, is essential for producing melatonin. One form of AANAT is found only in non-vertebrates, and appears to detoxify potentially hazardous compounds. The researchers contend that a second copy of the gene for producing AANAT appeared about 500 million years ago, when the original gene was duplicated. As vertebrate animals evolved, the second copy of the AANAT gene evolved, eventually specializing in producing melatonin. The theory also holds that the original copy of the AANAT gene later disappeared, and its function was taken over by other genes. In support of their theory, the researchers discovered that two animals thought to be like early vertebrates, the elephant shark and the ratfish, produce both the non-vertebrate and vertebrate forms of AANAT. Two other animals thought to have originated later in vertebrate evolution, the catshark and the sea lamprey, had only the vertebrate AANAT gene.

An international team of scientists led by National Institutes of Health researchers has traced the likely origin of the enzyme needed to manufacture the hormone melatonin to roughly 500 million years ago.

Their work indicates that this crucial enzyme, which plays an essential role in regulating the body’s internal clock, likely began its role in timekeeping when vertebrates (animals with spinal columns) diverged from their nonvertebrate ancestors.

The findings provide strong support for the theory that the time-keeping enzyme originated to remove toxic compounds from the eye and then gradually morphed into the master switch for controlling the body’s 24-hour cyclic changes in function.

The researchers isolated a second, nonvertebrate form of the enzyme from sharks and other contemporary animals thought to resemble the prototypical early vertebrates that lived 500 million years ago.

The study, published online in PNAS, was conducted by senior author David C. Klein, Ph.D., Chief of the Section on Neuroendocrinology in the NIH’s Eunice Kennedy Shriver National Institute of Child Health and Human Development (NICHD) and colleagues at NIH, and at institutions in France, Norway, and Japan.

Melatonin is a key hormone that regulates the body’s day and night cycle.  Dr. Klein explained that it is manufactured in the brain’s pineal gland and is found in small amounts in the retina of the eye.  Melatonin is produced from the hormone serotonin, the end result of a multistep sequence of chemical reactions.  The next-to-last step in the assembly process consists of attaching a small molecule-- the acetyl group-- to the nearly finished melatonin molecule.  This step is performed by an enzyme called arylalkylamine N-acetyltransferase, or AANAT.

Because of its key role in producing the body clock-regulating melatonin, AANAT is often referred to as the timezyme, Dr. Klein added.

The form of AANAT found in vertebrates occurs in the brain’s pineal gland and, in small amounts, in the retina.  Another form of the enzyme, termed nonvertebrate AANAT, has been found only in other forms of life, such as bacteria, plants and insects.

“Nonvertebrate AANAT appears to detoxify a broad range of potentially toxic chemicals,” Dr. Klein said.  “In contrast, vertebrate AANAT is highly specialized for adding an acetyl group to melatonin.  The two are as different from each another as a Ferrari is from a Model-T Ford, considering the speed of the reaction and how fast it can be turned on and off.”

In 2004, Dr. Klein and his coworkers published a theory that melatonin was at first a kind of cellular waste, a by-product created in cells of the eye when normally toxic substances were rendered harmless. Because melatonin accumulated at night, the ancestors of today's vertebrates became dependent on melatonin as a signal of darkness. As the need for greater quantities of melatonin grew, the pineal gland developed as a structure separate from the eyes, to keep serotonin and other toxic substances needed to make melatonin away from sensitive eye tissue.

“The pineal glands of birds and reptiles can detect light,” Dr. Klein said.  “And the retinas of human beings and other species also make melatonin.  So it would appear that both tissues evolved from a common, ancestral, light-detecting tissue.”

Before the current study, the researchers lacked proof of their theory, particularly in regard to the question of how the vertebrate form of the enzyme originated because it did not appear to exist in non-vertebrates and had been found only in bony fishes, reptiles, birds, and mammals—all of which lacked the non-vertebrate form.

The first evidence of how the vertebrate form of the enzyme originated came when study co-author Steven L. Coon, also of NICHD, discovered genes for the nonvertebrate and vertebrate forms of AANAT in genomic sequences from the elephant shark, considered to be a living representative of early vertebrates.

This finding indicated that the vertebrate form of AANAT may have resulted after a phenomenon known as gene duplication, Dr. Klein said.  Gene duplication, he added, typically results from any of a number of genetic mishaps during cell division.  Instead of one copy of a gene resulting from the process, an additional copy results, so that there are two versions of a gene where only one existed previously. The phenomenon is thought to be a major factor influencing evolutionary change.

The researchers theorized that following duplication, one form of AANAT remained unchanged and the other gradually evolved into the vertebrate form.  Dr. Klein said that at some point after vertebrate AANAT developed, vertebrates appear to have stopped making the nonvertebrate form, perhaps because it was no longer needed or because its function was replaced by a similar enzyme.

Before the researchers could continue, they needed to confirm their finding, to rule out that the nonvertebrate AANAT they found didn’t result from accidental contamination with bacteria or some other organism.  The NICHD researchers sought assistance from other research teams around the world.  DNA from Mediterranean sharks and sea lampreys was obtained via fishermen’s catches by Jack Falcon of the Arago Laboratory, a marine biology facility that is part of  the CNRS and the Pierre and Marie Curie University in France.  Samples from a close relative of the elephant shark—the ratfish—were provided by Even-Jorgensen at the Arctic University of Norway.  Finally, Susumo Hyodo of the University of Tokyo contributed samples from elephant sharks he collected off the coast of Australia.

Next, the Hyodo and Falcon groups isolated RNA from the retinas and pineal glands of the animals.  RNA is used to direct the assembly of amino acids into proteins.    From these RNA sequences, it was possible to assemble working versions of AANAT molecules—both the vertebrate and nonvertebrate forms.

The sequences of the proteins encoded by the AANAT genes were analyzed by Eugene Koonin and Yuri Wolf of the National Library of Medicine using computer techniques designed to study evolution.  Peter Steinbach, of NIH’s Center for Information Technology, examined the three-dimensional structures of nonvertebrate and vertebrate AANAT in the study animals and determined that the two forms of the enzyme likely had a common ancestor.

Taken together, their results provide evidence for the hypothesis that nonvertebrate AANAT resulted from duplication of the non-vertebrate AANAT gene about 500 million years ago and that following this event one copy of the duplicated gene eventually changed into the gene for vertebrate AANAT.

In addition to providing information on the origin of melatonin and the evolution of AANAT, the findings also have implications for research on disorders affecting vision. Vertebrate AANAT and melatonin are found in small amounts in the eyes of humans and other vertebrates.  Although they may play a role in detoxifying compounds, it is also reasonable to consider that this detoxifying function is shared with other enzymes.

“It’s possible that a malfunction in these other enzymes might lead to an accumulation of chemicals known as arylalkamines— in the same family as serotonin—and this might contribute to eye disease,” Dr. Klein said.  “Consequently, research into how these enzymes function might lead to therapies to protect vision.”