Duplication of gene on X chromosome appears to cause excessive growth 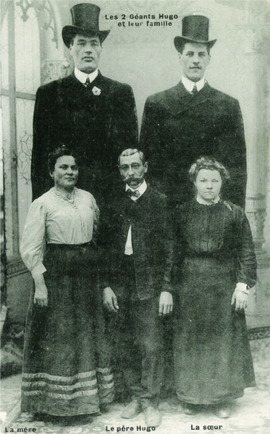 Researchers at the National Institutes of Health have found a duplication of a short stretch of the X chromosome in some people with a rare disorder that causes excessive childhood growth.  They believe that a single gene within the region likely has a large influence on how much children grow. The research comes from a lab at NIH’s Eunice Kennedy Shriver National Institute of Child Health and Human Development (NICHD), which seeks to understand growth.

“Finding the gene responsible for childhood overgrowth would be very helpful, but the much wider question is what regulates growth,” said Constantine Stratakis, M.D., D.Sc., lead author of the new paper and the scientific director of the Division of Intramural Research at NICHD.

In theory, the causes of overgrowth and undergrowth in children should be regulated by the same mechanisms, Dr. Stratakis explained.  “As pediatricians and endocrinologists, we look at growth as one of the hallmarks of childhood. Understanding how children grow is extraordinarily important, as an indicator of their general health and their future well-being.”

The study, appearing in the New England Journal of Medicine, was part of the intramural research program at the NICHD.  Support also came from NIH’s National Institute of Neurological Disorders and Stroke and the National Human Genome Research Institute.

The research started with a family who came to the NIH Clinical Center for treatment in the mid-1990s.  A mother who had been treated for gigantism had two sons who were also growing rapidly.  People with this condition are abnormally tall and may have delayed puberty, large hands and feet, and double vision. A second family, with an affected daughter, came to NIH from Australia. The girl had the same duplication the researchers saw in the first family.  Dr. Stratakis then contacted Albert Beckers, M.D., Ph.D., at the University of Liege, Belgium.  For more than 30 years, Dr. Beckers has been following people with gigantism and acromegaly, a disorder in which excessive growth begins after adulthood.  Dr. Beckers agreed to test these patients and identified the same duplication in a group of his patients as well.

Gigantism results from a defect in the pituitary, a pea-sized gland at the base of the brain that makes growth hormones and controls the activity of other glands in the body.  Some people with gigantism have a tumor in the pituitary that secretes extra hormone; others just have an oversized pituitary.  Gigantism is often treated by removing the tumor, or even the entire pituitary, but can sometimes be treated with medication alone.

“Giants are very rare.  If you have three cases in the same family, that is veryrare,” Dr. Stratakis said.  He explained that most of the pituitary gland of the mother in the first family was removed when she was 3 years old, and in adulthood she was only a little above average height.  Both of her sons had gigantism, too, and had pituitary surgery.

In their study, the researchers used whole-genome analysis to find major changes in the DNA. Every person in the study who had gigantism as an infant or a toddler had the same defect, a duplication of a stretch of the X chromosome.  Family members without gigantism did not have the duplication.

In all, the researchers studied 43 people with gigantism, most from the international cohort studied by Dr. Beckers.

“We believe GPR101 is a major regulator of growth,” Dr. Stratakis said.

The researchers also looked at samples from the pituitary tumors of 248 people with acromegaly, a condition in which adults produce excess growth hormone.  None of the patients had the duplication that was seen in people with gigantism.  However, 11 of the acromegaly patients did have a mutation in GPR101, suggesting that the gene also may play a role in that condition as well.

Figuring out exactly how the protein derived from GPR101works is the next frontier, Dr. Stratakis said.  The team is now working on that question in the lab.

The researchers hope their discovery will lead to new treatments for gigantism in children.  It may also provide insights into undergrowth.  Undergrowth is currently treated by giving children growth hormone.