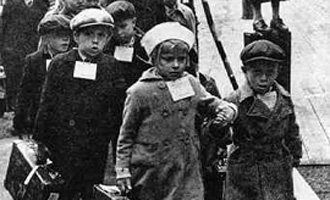 Mental illness associated with early childhood adversity may be passed from generation to generation, according to a study of adults whose parents evacuated Finland as children during World War II. The study was conducted by researchers at the National Institutes of Health, Uppsala University in Sweden, and Helsinki University in Finland. It appears in JAMA Psychiatry.

The research team found that daughters of female evacuees had the same high risk for mental health disorders as their mothers, even though they did not experience the same adversity. The study could not determine why the higher risk for mental illness persisted across generations. Possible explanations include changes in the evacuees’ parenting behavior stemming from their childhood experience or epigenetic changes—chemical alterations in gene expression, without any changes to underlying DNA.

“Many studies have shown that traumatic exposures during pregnancy can have negative effects on offspring,” said study author Stephen Gilman, Sc.D., of the Division of Intramural Population Health Research at the Eunice Kennedy Shriver National Institute of Child Health and Human Development. “Here, we found evidence that a mother’s childhood traumatic exposure—in this case separation from family members during war—may have long-lasting health consequences for her daughters.”

From 1941 to 1945, roughly 49,000 Finnish children were evacuated from their homes to protect them from bombings, malnutrition and other hazards during the country’s wars with the Soviet Union. The children, many of them only preschoolers, were placed with foster families in Sweden. In addition to separation from their families, the children faced the stresses of adapting to their foster families, and in many cases, learning a new language. Upon their return, many children experienced the additional stress of readjusting to Finnish society.

During the same time, thousands of Finnish families chose not to evacuate all their children and often kept some at home, but little information exists on the rationale for their decisions. The researchers compared the risk of being hospitalized for a psychiatric (mental health) disorder among offspring of the evacuees to the risks of psychiatric hospitalization among the offspring of the siblings who remained with their parents. Studying the two groups—cousins to each other—allowed the researchers to compensate for family-based factors that can contribute to mental health problems and to focus instead on the evacuees’ wartime experience.

In a previous study, the researchers found that women evacuated as children were more than twice as likely to be hospitalized for a psychiatric disorder than their female siblings who remained at home. For the current study, the researchers linked records from this generation—more than 46,000 siblings born between 1933 and 1944—to those of their offspring, more than 93,000 individuals born after 1950. Of these, nearly 3,000 were offspring of parents who had been evacuated to Sweden as children, and more than 90,000 were offspring of parents who remained in Finland during the war.

The researchers did not find any increase in psychiatric hospitalizations for the sons or daughters of males who had been evacuated as children.

The study could not determine why the daughters of female evacuees had a higher risk of mental illness. One possibility is that the stresses of the evacuees’ experience affected their psychological development in ways that influenced their parenting style. Another possibility is that the evacuee experience resulted in epigenetic changes. For example, the researchers cited an earlier finding that Holocaust survivors have higher levels of compounds known as methyl groups bound to the gene FKBP5 and have passed this change on to their children. This higher level of methyl groups appears to alter the production of cortisol, a hormone that regulates the stress response.

“The Finnish evacuation was intended to protect children from the many harms associated with the country’s wars with the Soviet Union,” said study co-author Torsten Santavirta, Ph.D., of Uppsala University. “Our observation of long-term psychiatric risk that reached into the next generation is concerning and underscores the need to weigh benefits as well as potential risks when designing policies for child protection.”

The authors concluded that future studies are needed to understand how the experience of war affects the mental health of parents and their offspring and to develop interventions to help families affected by armed conflict.