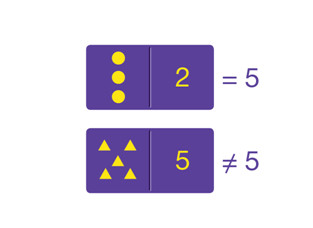 In the study, the researchers found that children with a math learning disability had difficulty with a test consisting of symbols and numbers. Students were asked to quickly identify whether groups of objects, or numerals, or a combination of the two, like the dominoes above, matched or did not match, a target value; in this case, five.

Children who start elementary school with difficulty associating small exact quantities of items with the printed numerals that represent those quantities are more likely to develop a math-related learning disability than are their peers, according to a study supported by the National Institutes of Health.

The children in the study who appeared to have difficulty grasping the fundamental concept of exact numerical quantities— that the printed numeral 3, for example, represents three dots on a page— went on to be diagnosed with math learning disability by fifth grade.

Other early factors correlated with a math learning disability were difficulty recalling answers to single-digit addition problems, distractibility in class, and difficulty understanding that more complex math problems can be broken down into smaller problems that can be solved individually.

Although the math learning disabled children did make limited progress in subsequent grades, by fifth grade they had not caught up to their typically achieving peers in the ability to recall number facts or in their ease of adding sets of dots and numerals together. The authors note that the math disabled students did catch up in other areas, such as the use of counting to solve problems.

The study was not designed to prove cause and effect, so the researchers do not know whether the factors they identified caused the children’s math learning disability or were linked to other, unidentified factors.

“The search for factors underlying difficulty learning mathematics is extremely important,” said Kathy Mann Koepke, Ph.D., of NIH’s Eunice Kennedy Shriver National Institute of Child Health and Human Development (NICHD), which funded the study. “Once we identify such factors, the hope is that we can modify them through appropriate teaching methods to help people who have difficulty learning and using math.”

“Math skills are important for higher education and for entry into many higher paying technical fields,” she said. “Math skills have many health implications. For example, many American adults lack even the basic math skills necessary to estimate the appropriate number of calories in their diets or to calculate the time intervals at which to take their medications.”

The study was conducted by Mary K. Hoard, Ph.D., Lara Nugent, Drew H. Bailey and David C. Geary, Ph.D., all of the University of Missouri, Columbia.

Their findings appear in the Journal of Educational Psychology.

The researchers’ analysis was based on a battery of tests they gave one to three times each year to 177 students at 12 Columbia, Mo., public schools. The testing process took place from kindergarten through fifth grade. The researchers measured several factors:

The researchers classified the students into three groups based on their early achievement and the subsequent progress they made in math from kindergarten to fifth grade. One group—referred to as typically achieving students—had average scores in kindergarten and developed their skills at an average rate during their early school years (132 students). Low-achieving students had an average score in kindergarten and made inconsistent and slow progress (29 students). Students with a low initial score and consistently slow progress were described as learning disabled with regard to math (16 students).

After their analysis, the researchers found that differences between groups in kindergarten scores were correlated with the result of one test in particular. For this test, students were asked to look at a series of rectangles, resembling dominoes, on a computer screen. Each domino was each divided into two or three areas; some areas contained one to nine dots, and others a written numeral. Students were asked to quickly circle any dominos in which the number of dots, together with the numeral, matched the target number and to not circle those that did not match.

The researchers found that the difference in scores from this test was linked to the overall gap in math scores between typically achieving and math learning disabled groups.

“Our findings suggest that children who generally struggle with math—the low achievers—may have a poor sense of numbers, but they can narrow the achievement gap in part because most of them can memorize new math facts and, thus, learn some aspects of math as quickly as their typically achieving peers,” said Dr. Geary.

Dr. Geary added that, in contrast to the low achievers, students with a math learning disability not only have a poor concept of numbers, but also have difficulty memorizing math facts.

Clarifying the factors that contribute to a math learning disability may lead to the development of teaching methods that help students overcome difficulties with number concepts and skills, Dr. Mann-Koepke said. It is important to identify potential difficulties early, when chances for successfully overcoming them are greatest.

Other NICHD-funded investigators have also identified basic risk factors for math learning disability. These researchers have shown that math skills are linked to the approximate number system, a person’s intuitive ability to estimate quantities or identify the approximate number in a set. One study of grade school children showed that this ability is impaired in children with a math learning disability. A related study showed that difficulty with estimating such quantities is apparent in children as young as 3 and is correlated with later poor math performance in school. Researchers do not yet know if the ability to distinguish between small, exact quantities is related to the approximate number system.