Behaviors and brain activity consistent between mothers from different countries 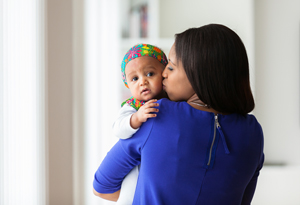 Infant cries activate specific brain regions related to movement and speech, according to a National Institutes of Health study of mothers in 11 countries. The findings, led by researchers at NIH's Eunice Kennedy Shriver National Institute of Child Health and Human Development (NICHD), identify behaviors and underlying brain activities that are consistent among mothers from different cultures. Understanding these reactions may help in identifying and treating caregivers at risk for child maltreatment and other problematic behaviors.

The study team conducted a series of behavioral and brain imaging studies using functional magnetic resonance imaging (fMRI). In a group of 684 new mothers in Argentina, Belgium, Brazil, Cameroon, France, Israel, Italy, Japan, Kenya, South Korea and the United States, researchers observed and recorded one hour of interaction between the mothers and their 5-month-old babies at home. The team analyzed whether mothers responded to their baby's cries by showing affection, distracting, nurturing (like feeding or diapering), picking up and holding, or talking. Regardless of which country they came from, mothers were likely to pick up and hold or talk to their crying infant.

Through fMRI studies of other groups of women, the team found that infant cries activated similar brain regions in new and experienced mothers: the supplementary motor area, which is associated with the intention to move and speak; the inferior frontal regions, which are involved in the production of speech; and the superior temporal regions that are linked to sound processing.

Overall, the findings suggest that mothers' responses to infant cries are hard-wired and generalizable across cultures. The study also builds upon earlier work showing that women's and men's brains respond differently to infant cries.

Marc Bornstein, Ph.D., chief of NICHD's Section on Child and Family Research, is available for interviews.

To arrange an interview with Dr. Bornstein, please call Linda Huynh at 301-496-5133 or e-mail nichdpress@mail.nih.gov.