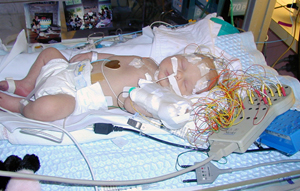 Brain scans taken of newborns who received cooling treatment after blood or oxygen deprivation to the brain can predict the extent of a child’s recovery by 6 or 7 years of age, according to a study by a National Institutes of Health (NIH) research network. The magnetic resonance imaging (MRI) scans were originally taken as part of the child’s medical care.

Hypoxic ischemic encephalopathy (HIE) results from failure of an infant’s brain to receive sufficient oxygen or blood around the time of birth. HIE may result from such causes as compression of the umbilical cord, tearing of the placenta from the uterine wall during birth, and a rupture of the uterus.  The condition may result in intellectual and developmental disabilities and sometimes can be fatal.

In a 2005 study, physicians with the Neonatal Research Network, funded by NIH’s Eunice Kennedy Shriver National Institute of Child Health and Human Development (NICHD), lowered the body temperature of a group of infants with HIE to about 92 degrees Fahrenheit for 72 hours, beginning in the first 6 hours of life. Fewer infants receiving this cooling treatment died or experienced moderate or severe disability than those in the control group, who received standard supportive therapy. Infants in the cooling group also averaged higher on measures of mental and physical development than did those in the control group. A 2012 follow-up study evaluated the children again at ages 6 and 7 and found that the children who received the cold treatment were more likely to have survived than those in the control group. They also had no increased risk of disability, compared to the control group.

For the current study, researchers compared the scans from the original 2005 study to the results of tests and evaluations from the children at ages 6 and 7. Brain scans were taken when the infants were roughly one month old. The researchers assigned each scan to 1 of 6 categories called patterns, based on the extent of the injuries apparent in each image. For pattern 0, children had no evidence of injury; patterns 1A and 1B showed slight injury; 2A and 2B had moderate injury; and pattern 3 showed severe injury. The objective of the study was to identify any association of these patterns with the study’s primary outcome: whether a child had died or had an IQ less than 70 (indicating intellectual or developmental disability).

A total of 124 children had been evaluated by MRI. Of these, death or IQ less than 70 by ages 6 or 7occurred in:

The study authors concluded that the patterns of brain injury seen in MRI scans of infants receiving the cooling treatment for HIE are biomarkers, or indicators, of their neurological development at 6 and 7 years of age.

“This study shows that these early scans provide information which may later inform the outcome of these children through early childhood,” said Rosemary Higgins, M.D., study author and program scientist for NICHD’s Neonatal Research Network.

Participants in the original study were enrolled within 6 hours of birth. A study currently under way in the network is examining the effectiveness of the cooling therapy for infants unable to receive the cooling treatment until 6 to 24 hours after birth. Researchers also will use MRI scans to assess the progress of children in this group.