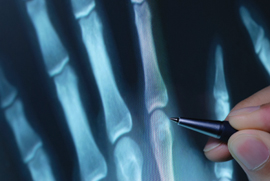 Infants exposed in the womb to a drug used to treat HIV and reduce the transmission of HIV from mother to child, may have lower bone mineral content than those exposed to other anti-HIV drugs, according to a National Institutes of Health study.

Researchers found that pregnant women who received the drug tenofovir disoproxil fumarate in their third trimester gave birth to babies whose bone mineral content was 12 percent lower than that of infants who were not exposed to the drug in the uterus. Proper mineral content helps strengthen normal bones. The study appears in Clinical Infectious Diseases.

“At this point, we can say that those who care for pregnant women with HIV and their children should be aware that prescribing tenofovir to pregnant women could be a concern for their infants’ bones,” said George K. Siberry, M.D., the first author of the study and medical officer with NIH’s Eunice Kennedy Shriver National Institute of Child Health and Human Development (NICHD).

Although the study authors described the results as concerning, they cautioned against any changes in the use of tenofovir in pregnant women. The drug has proved successful as part of drug regimens that treat HIV in pregnant women, and often is used to prevent HIV transmission to infants. The researchers called for additional studies to understand bone health and development among children born to women who took tenofovir during their pregnancies.

“Families should keep in close touch with their physicians to monitor their child’s bone development,” Dr. Siberry added.

In the study, researchers enrolled a total of 143 infants at 14 sites across the United States from 2011 to 2013. Of these participants, 74 were exposed to tenofovir in the uterus, while 69 were given other anti-HIV drugs. Researchers used special, low-radiation X-ray scans, called DXA scans to measure bone mineral content within the first four weeks of birth.

The study authors point out that tenofovir use has been associated with bone loss in adults and older children. A few NIH-funded studies have found that adults who used tenofovir were at increased risk for bone fracture.

Information on how to promote healthy bone development in children is available from NIH’s National Institute of Arthritis and Musculoskeletal and Skin Diseases at http://www.niams.nih.gov/health_info/bone/bone_health/juvenile/default.asp#3.