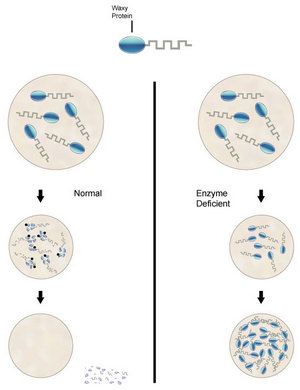 Researchers at the National Institutes of Health have identified a potential new drug that could help in the treatment of a form of Batten disease, a fatal childhood disorder.  The researchers tested the drug in mice with the disease and found that it slowed the loss of coordination seen in the disorder, and extended the animals’ life span.

The drug is derived from hydroxylamine, a molecule chemically similar to ammonia.  Hyroxylamine is toxic, but a slight change in the molecule’s chemical structure results in a non-toxic molecule, called NtBuHA, short for N-(tert-Butyl-Hydroxylamine).

The term Batten disease refers to a group of disorders resulting in deterioration of the nervous system.  These disorders occur in 1 of every 12,500 births, according to the study authors.

“The NIH researchers have found a promising lead for treating a devastating disease that has defied all attempts to treat it,” said Constantine A. Stratakis, M.D., director of the Division of Intramural Research at the NIH’s Eunice Kennedy Shriver National Institute of Child Health and Human Development.

The researchers hope NtBuHA will be useful for treating a particular subtype of the disease, infantile Batten disease.  With infantile Batten disease, children appear normal at birth, but experience a gradual, but steady, loss of brain tissue.   By 11 to 18 months, they experience difficulty with physical coordination and begin to lose their vision.  By age 4, they go blind and have no apparent brain activity.  They may live in a vegetative state for several more years before dying.

Children with infantile Batten disease have a genetic deficiency of an enzyme, PPT1 (palmitoyl-protein thioesterase-1). Ordinarily PPT1 breaks down ceroid, a waxy substance.  Without PPT1, ceroid builds up in brain cells, and results in infantile Batten disease. The researchers knew that the compound hydroxylaminemimics the function of the PPT1 enzyme.  However, the compound is also toxic. After testing a panel of chemically modified hydroxylamines, they found that NtBuHA could mimic PPT1 in cultured cells from infantile Batten patients,   preventing the waxy buildup, but without hyroxylamine’s toxic effects.

Next, the researchers tested NtBuHA on a strain of mice genetically modified to lack the PPT1 enzyme.  They added NtBuHA to the animals’drinking water and found that it reached the animals’ brains, where it broke down and depleted the waxy deposits. Although NtBuHA did not prevent all of the damage that typically occurs in the mouse form of the disease, the waxy buildup was greatly reduced in the treated mice as compared to the untreated mice. The researchers found that NtBuHA protected the neurons in the animals’ brains, slowed the deterioration in motor coordination and extended the animals’ life span.

“We hope to test NtBuHA as a possible therapy for infantile Batten disease,” said senior author Anil B. Mukherjee, M.D., Ph.D., head of the Section on Developmental Genetics at the NICHD.  The researchers are currently working to gain the approval required for testing such new drugs in clinical trials with patients.

Their findings appear in Nature Neuroscience.

Dr. Mukherjee and his colleagues are currently evaluating two other drugs, Cystagon and Mucomyst, for the treatment of patients with infantile Batten disease.  Like NtBuHA, these drugs also break down the waxy deposits in the disease.  It is possible that combining multiple drugs with activity against ceroid may one day provide a more effective treatment against these disorders, Dr. Mukherjee added.