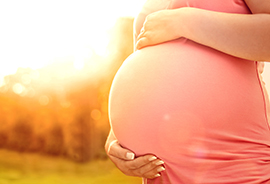 Narrator: Welcome to Milestones, a podcast featuring research and insights into child health and human development.

Our guest is NICHD’s Dr. Pauline Mendola, lead author of two recent papers examining whether air pollution and extreme temperatures increase the risk of stillbirth. We know that heatwaves and critical events, such as a major power outage, can trigger severe health complications. But few studies have looked at the effects of air pollution or extreme temperatures during pregnancy. Dr. Mendola and her colleagues analyzed hospital and regional U.S. climate data to evaluate possible links between air pollution, extreme temperatures and stillbirth. Their study included information on more than 200,000 babies born between 2002 and 2008 at 12 clinical centers across the country.

What they found was startling.

Dr. Mendola, thanks for joining us.

Dr. Mendola: Thank you. I’m actually very pleased to be here and talk about our work.

Ms. Daly: Can you tell us what you found in these studies?

Ms. Daly: So, let me make sure I have this right. Ozone is not emitted directly into the air. It comes from reactions between other pollutants and sunlight? Common pollutants like nitrogen oxides, which come from traffic and other industrial sources of combustion, are part of that reaction that leads to ozone. Do I have that right?

Dr. Mendola: That’s exactly right. It’s related to sunlight and because of that ozone levels are usually higher in the summer and you’ll often hear public alerts issued when the levels are high to recommend people avoid outdoor activity – they’re sometimes called ‘Ozone Action Days.’ So, people are familiar with that happening in the summer. And those Action Alerts are really particularly focused on people with asthma or who are otherwise susceptible, but they don’t include pregnant women.

And in our data, these short-term daily ozone levels were associated with about a 13 to 22 percent increased risk of stillbirth in the week before delivery. And we were really surprised by those numbers. It was a larger effect and a higher risk estimate than we thought we would see.

Ms. Daly: But how can that one week, that seven-day period before delivery make a difference? I mean I thought that the baby by the end of pregnancy was pretty well cooked, so to speak.

Dr. Mendola: Well, not when it comes to stillbirth. It’s a really important outcome that very little is known about, especially those acute effects. So, babies can die because the placenta fails sometimes at the end of pregnancy. Sometimes babies die during delivery from a cord accident or other placental problems. And if there are potentially modifiable risks, I mean things we might be able to change, those are hard to find. And in this case, we know that both air pollution and exposure to extreme temperature is associated with death in adults, and typically those deaths are cardiovascular- or respiratory-related causes, but actually very little research has been done looking at those effects in pregnancy. And that was really the prime motivator for our research.

So again, like our ozone results, we saw some acute effects of temperature in the week prior to delivery, as well as that chronic exposure. But for temperature, the acute week before exposure was only a risk in the warm season where each degree of Celsius, (which is about 2 degrees Fahrenheit), increase in temperature, increased the stillbirth risk about 6 percent.

Dr. Mendola: The only link we saw with cold was for the chronic effect. So, the average temperature across the whole pregnancy when that was in the cold range for that region, we did see a stillbirth-increase risk. But not in the days prior to delivery. So, no acute effect for cold and that’s probably because the chronic stressors operate differently on the body compared to the short-term exposure. So, in the short term, in general, people are better able to cope with cold temperatures, they may layer up, they may wear more heavy clothes, but in extreme heat, not everyone can access or afford cooling, like air-conditioning. So, the short-term exposure to cold may be easier to manage than short-term heat exposure.

Ms. Daly: What’s the takeaway from your research?

Dr. Mendola: There are about 23,000 stillbirths every year in the United States.  And many of the causes are unknown. If our data are confirmed in other studies, we see that even small temperature increases, increase the risk of stillbirth as many as four additional stillbirths in every 10,000 births and we think that chronic exposure could be related to as many as 2,000 cases a year as well. While it’s important to remember no one study like ours proves that it’s a causal link, we do know that cardiovascular and respiratory complications are associated with both air pollutants and temperature extremes in the general population. And we think that stillbirth and pregnancy complications really merit more attention.

We need to know more about stillbirth in general, and, in particular, we want to learn more about the underlying biology that links pollution and extreme temperatures with stillbirth. Stillbirth is a devastating outcome and we know so little about the potentially modifiable causes. We really hope our findings will encourage more work in this area and that we can learn more about ways that we might prevent this tragic outcome.

Ms. Daly: Where do you go from here?

Dr. Mendola: So, from here, I think it would be very helpful to see other researchers try to replicate our findings. It’s important to try to determine if these effects are in fact causal and also to get a better handle on the magnitude of the effects.

Ms. Daly: And just to be clear when you say causal, this particular study didn’t show a cause. It shows an association, a link?

Dr. Mendola: Correct. Yes, and in fact, often these kinds of large population studies will give you the sentinel sign that something is wrong. Right, so, in a big study like this, we have the ability to control for lots of other clinical factors, as well as demographic factors, and local, regional characteristics of the populations, and we see this strong sign. So that suggests that this is a place where we should do more mechanistic studies.

Ms. Daly: Well, thank you so much for explaining the research and we look forward to seeing more on the topic.

Ms. Daly: I’ve been speaking with Dr. Pauline Mendola, an investigator and epidemiologist in NICHD’s Intramural Research Program. Thanks for listening to Milestones. I’m your host, Meredith Carlson Daly.