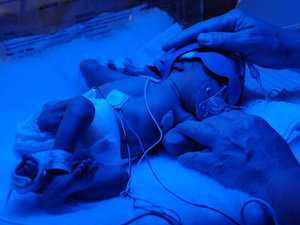 Extremely preterm infants, those born before the 28th week of pregnancy, are surviving in greater numbers and escaping serious illness, according to a comprehensive review of births in a National Institutes of Health research network.

The study, published in the Journal of the American Medical Association, reviewed the birth records of more than 35,000 premature infants born from 1993 to 2012 in 26 U.S. centers participating in the Neonatal Research Network, a program funded by NIH’s Eunice Kennedy Shriver National Institute of Child Health and Human Development (NICHD). The lead author was Barbara J. Stoll, M.D., chair of pediatrics at Emory University School of Medicine.

Among the major findings:

Among the survivors, the researchers saw an increase in the rate of bronchopulmonary dysplasia a complication often resulting from respiratory therapy. Improvements in respiratory care appear to have saved many infants who otherwise may have died. Nonetheless, the infants’ under-developed lungs often sustain damage.

“NICHD has funded newborn care research for many years,” said Rosemary Higgins, M.D., who oversees NICHD’s Neonatal Research Network. “We’re now seeing the results of that investment in improvements in survival and outcomes.”

More than 450,000 premature babies are born each year in the United States. Higgins attributed the boost in survival to advances in maternal and newborn care, such as the increased use of antenatal steroids - these drugs are given to women at risk for preterm birth to help stimulate lung development in the fetus. In 1993, physicians gave antenatal steroids to only 24 percent of women at risk for delivering too early, according to the study. A 1995 NIH consensus statement on antenatal steroids led to the widespread use of the treatment. By 2012, doctors were giving the steroids to nearly 87 percent of at-risk pregnant women.

The study authors noted that the increase in survival of extremely preterm infants parallels an increase in cesarean sections in this age group. It’s possible, Dr. Higgins explained, that “physicians are more likely to perform the surgery than they were in previous years.” The surgery may result in a less traumatic birth for the infant and therefore may contribute to survival.

The study authors also stressed the need for continued research on the care of extremely premature infants. Although survival has increased over the past two decades, including survival without major illnesses, preterm birth in the United States still poses a substantial burden to families and society at-large, they wrote.

NICHD recently launched the Human Placenta Project, an initiative aimed at understanding the function of this major organ in real time during pregnancy. Investigators hope that by tracking a healthy placenta, they can gain clues about abnormal development, which ultimately may help improve preterm birth outcomes, among other benefits.