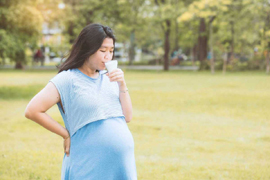 Extreme hot or cold temperatures during pregnancy may increase the risk of preterm birth, according to study by researchers at the National Institutes of Health.

The study authors found that extremes of hot and cold during the first seven weeks of pregnancy were associated with early delivery. Women exposed to extreme heat for the majority of their pregnancies also were more likely to deliver early.

The researchers found more consistent associations with early delivery after exposure to extreme heat than to extreme cold weather. They theorized that, during cold spells, people are more likely to seek shelter and so could more easily escape the cold's effects. But during extreme heatwaves, people are more likely to endure the temperature, particularly when the cost of or access to air conditioning is an impediment.

The study was published in Environmental Health Perspectives.

"Our findings indicate that it may well be prudent to minimize the exposure of pregnant women to extremes in temperature," said the study's senior author, Pauline Mendola, Ph.D., an epidemiologist in the Division of Intramural and Population Health Research at the NIH's Eunice Kennedy Shriver National Institute of Child Health and Human Development (NICHD).

A pregnancy is considered full term at between 39 and 40 weeks. Preterm birth occurs before 37 weeks of pregnancy and increases the risk for infant death and long term disability. It is unknown why extremes of hot or cold might influence preterm birth risk. However, the researchers theorize that the stress of temperature extremes could hinder the development of the placenta or alter blood flow to the uterus, both of which could potentially lead to early labor.

Overall, exposure to extreme heat for the duration of pregnancy was associated with increases in risk for delivery at 34 weeks and 36-38 weeks by 6 to 21 percent.

An increase in the number of extreme hot days due to climate change could lead to increases in the preterm birth rate, the authors wrote. The authors added that their findings underscore the need for health professionals and policy makers to devise interventions for minimizing pregnant women's exposure to extreme temperatures. The authors also called for more research to understand how temperature extremes might increase preterm birth risk.