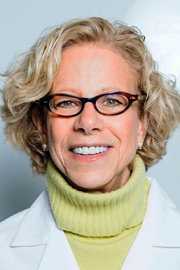 "Diana's accomplishments as a prenatal geneticist, along with her leadership, clinical and research experience in both pediatrics and obstetrics, make her ideally suited to lead NICHD," said Dr. Collins. "We are excited to have her join our team and lead this important area of research."

As NICHD director, Dr. Bianchi will oversee research on pediatric health and development, maternal health, medical rehabilitation, population dynamics, reproductive health, and intellectual and developmental disabilities. With an annual budget of approximately $1.3 billion, NICHD supports research grants and contracts at universities and other institutions across the country and overseas and an intramural research program of scientists working at NIH. The mission of NICHD is to enhance lives throughout all stages of human development, from pre-pregnancy through adulthood, and to improve the health of children, adults, families and communities.

She will join NIH from the Floating Hospital for Children and Tufts Medical Center in Boston where she serves as the founding executive director of the Mother Infant Research Institute and vice chair for pediatric research. She is also the Natalie V. Zucker Professor of Pediatrics, and Obstetrics and Gynecology at Tufts University School of Medicine and the editor-in-chief of the international journal Prenatal Diagnosis.

A practicing medical geneticist with special expertise in reproductive genetics, Dr. Bianchi's research focuses on prenatal genomics with the goal of advancing noninvasive prenatal DNA screening and diagnosis to develop new therapies for genetic disorders that can be administered prenatally.

Dr. Bianchi earned her M.D. from Stanford University School of Medicine, Stanford, California. Following medical school, she completed her residency training in pediatrics at Boston Children's Hospital and her postdoctoral fellowship training in medical genetics and neonatal-perinatal medicine at Harvard Medical School. She is board-certified in all three specialties.

From 2011-2015 she served on NICHD's National Advisory Council and is a past president of the International Society for Prenatal Diagnosis and the Perinatal Research Society. Dr. Bianchi is a former member of the Board of Directors of the American Society for Human Genetics and a former council member on both the Society for Pediatric Research and the American Pediatric Society. She was elected to membership in the Institute of Medicine (now National Academy of Medicine) in 2013.

Dr. Bianchi recently received two major lifetime achievement awards: the Landmark Award in 2015 from the American Academy of Pediatrics in recognition of her research and contributions to genetics and newborn care, and the Maureen Andrew Award for Mentoring in 2016 by the Society for Pediatric Research, which recognized her commitment to mentoring the next generation of clinician-scientists.

"I want to recognize and thank Catherine Y. Spong, M.D., who served ably as acting director of NICHD over the past year," added Dr. Collins. "Cathy showed much commitment, dedication and leadership in this role. She is an incredible asset to the NIH community."