Scientists plug into a learning brain

Learning is easier when it only requires nerve cells to rearrange existing patterns of activity than when the nerve cells have to generate new patterns, a study of monkeys has found. The scientists explored the brain’s capacity to learn through recordings of electrical activity of brain cell networks. The study was partly funded by the National Institutes of Health. 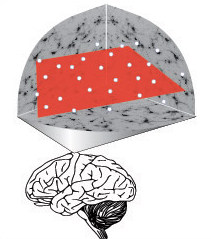 Scientists mapped neural activity patterns (white dots) in a learning brain. They found that learning occurs faster when it only requires existing patterns of activity (red box) than when it needs to use patterns outside of the red box. Courtesy of Batista lab, University of Pittsburgh

The human brain contains nearly 86 billion neurons, which communicate through intricate networks of connections. Understanding how they work together during learning can be challenging. Dr. Batista and his colleagues combined two innovative technologies, brain-computer interfaces and machine learning, to study patterns of activity among neurons in monkey brains as the animals learned to use their thoughts to move a computer cursor.

“This is a fundamental advance in understanding the neurobiological patterns that underlie the learning process,” said Theresa Cruz, Ph.D., a program official at the National Center for Medical Rehabilitations Research at NIH’s Eunice Kennedy Shriver National Institute of Child Health and Human Development (NICHD). “The findings may eventually lead to new treatments for stroke as well as other neurological disorders.”

Brain-computer interfaces seek to turn thoughts into action. With small surgically implanted electrodes, researchers can simultaneously monitor the electrical activity of hundreds of neurons. A computer converts the signals into commands to move an external device, such as a robotic arm or a computer cursor. Brain-computer interfaces are being developed to help paralyzed patients as well as to study the function of healthy brains.

“This evolving technology is a powerful tool for brain research,” said Daofen Chen, Ph.D., a program director at the National Institute of Neurological Disorders and Stroke (NINDS), part of NIH. “It helps scientists study the dynamics of brain circuits that may explain the neural basis of learning.”

In this study, the research team used brain-computer interfaces in two animals to examine learning in the motor cortex, a part of the brain that controls movement. The firing patterns of the neurons they recorded were used to control a computer cursor. As the animals learned to move the cursor to a designated spot on the monitor, the computer used machine learning to map brain cell activity to cursor movement. Machine learning is a method of programming a computer to learn and constantly adjust its commands based on previous data or experience. In this case, it created a feedback loop between the animal and the computer, which improved the animal’s ability to use its thoughts to move the cursor.

“Just as Netflix uses machine learning to predict the movies we’d like to watch, we used it to characterize the activity patterns that the brain produced during learning,” said Dr. Yu.

At first, the scientists noticed that the ensemble of neurons recorded in each animal had a small set of natural, or favored, firing patterns that were used to move the cursor, which they called the “intrinsic manifold.” After determining the intrinsic manifold, the team reprogrammed the map between neural activity and cursor movement. For instance, if a firing pattern originally caused the cursor to move to the top of the screen, then the interface would move the cursor to the bottom. The team then observed whether the animals could learn to generate the appropriate neural activity patterns to compensate for the changes.

“It’s as if we turned a computer mouse upside down in a person’s hand and asked him to click on an icon, except the mouse is entirely within the subject’s brain,” said Patrick Sadtler, a Ph.D. candidate at the University of Pittsburgh, who is the lead author of the study.

“It appears that the brain sets constraints on the speed with which we learn new things. Characterizing those constraints might enable us to predict which skills will be quicker to learn, and which might take longer,” said Dr. Batista. He and his colleagues speculated that, for humans, thinking outside the box requires more difficult changes in neural activity.

About the Eunice Kennedy Shriver National Institute of Child Health and Human Development (NICHD): The NICHD sponsors research on development, before and after birth; maternal, child, and family health; reproductive biology and population issues; and medical rehabilitation. For more information, visit the Institute's website at http://www.nichd.nih.gov.