Stresses of Poverty may Impair Learning Ability in Young Children

The stresses of poverty—such as crowded conditions, financial worry, and lack of adequate child care—lead to impaired learning ability in children from impoverished backgrounds, according to a theory by a researcher funded by the National Institutes of Health. The theory is based on several years of studies matching stress hormone levels to behavioral and school readiness test results in young children from impoverished backgrounds.

Further, the theory holds, finding ways to reduce stress in the home and school environment could improve children's well being and allow them to be more successful academically.

High levels of stress hormones influence the developing circuitry of children's brains, inhibiting such higher cognitive functions such as planning, impulse and emotional control, and attention. Known collectively as executive functions, these mental abilities are important for academic success.

Although poverty is considered a major source of stress, the findings also suggest that other sources of stress may affect children in all income groups―for example, from divorce, harsh parenting, or struggles with a learning disability.

"The conclusion from this body of work is that working to reduce inappropriate environmental stresses facing young children would not only improve their overall well being, but also improve their ability to learn in school," said James A. Griffin, Ph.D., of the Child Development and Behavior Branch at the Eunice Kennedy Shriver National Institute of Child Health and Human Development (NICHD).

The body of research was described in the September/October issue of Scientific American Mind, in an article by Dr. Blair.

During the course of their research, Dr. Blair and his colleagues measured children's levels of cortisol, a hormone the body releases in response to stress. With minor stress, a modest increase followed by decrease in cortisol over time is associated with improved performance on complex tasks (see graphic below). However, Dr. Blair explained, at high levels of stress, particularly over a long period of time, cortisol can be sustained at high or low levels or even become blunted, actually decreasing in response to challenges.

In one study, Dr. Blair and colleague Rachel Peters Razza, Ph.D., tested 170 4-year-old children who were attending Head Start—the preschool program for children in poverty. The researchers analyzed levels of cortisol in the children's saliva before, during and after the testing, as a measure of the stress the children experienced when participating in the tests. The researchers also assessed children's executive function, asking children to tap a peg twice, after the researchers tapped it once, and vice versa, and to identify different ways in which pictures of items were similar in terms of shape, color, and size. 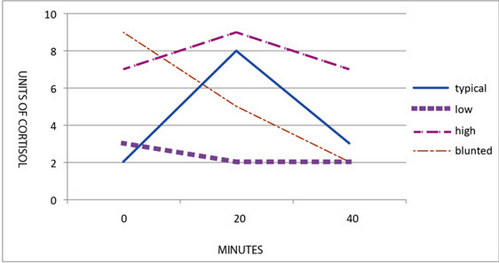 Cortisol levels in saliva tend to follow one of four patterns in people's response to stress. Research indicates that emotional regulation, self-control and academic performance are tied to the typical pattern, in which cortisol rises in response to stress and falls again when the stressor is gone. Consistently high levels of cortisol as well as blunted responses to stress are linked with poor self-control and academic difficulty.

In this study, the researchers found that children exhibiting the typical cortisol response pattern had higher levels of executive function. Teachers also rated these children as being high in self-control in the classroom. In contrast, children exhibiting a flat low or high response or a blunted response had low levels of executive function and were rated by teachers as having poor self-regulation.

The researchers next sought to identify which aspects of poverty might be particularly stressful for children. Dr. Blair and his colleagues focused on parenting style. In the article, he cited earlier research showing that parents living in poverty are more likely than are other parents to be concerned with eliciting obedience from their children by disciplining them.

"Although parents in poverty can and do provide sensitive care, they are less likely to do so, given the realities of their situation and, potentially, their own high stress levels," Dr. Blair said.

For about seven years, the researchers have been observing more than 1,200 children and their families, as part of the Family Life Project, an NICHD-funded study of the effects of growing up in rural poverty. Most of the children are from poor rural communities in Appalachia and the Deep South. In a study published about their observations, the researchers analyzed video recordings of mothers interacting with their children during play sessions. Children whose mothers engaged in scaffolding—creating opportunities to accomplish small tasks, like stacking blocks—had lower cortisol levels and were more attentive. In contrast, the children of mothers who were more authoritative—completing the task for their children, or restricting the children's activity— had higher cortisol levels, suggesting that the children had higher stress levels.

This association between parenting style and cortisol level was present when the children were 7 months old, and again when they were 15 months old.

In a subsequent study, the researchers sought to ascertain the influence of poverty on children's executive functioning. The researchers found that the more impoverished the family, the less likely the parents were to engage in the scaffolding approach. The children of these parents were more likely to have elevated cortisol levels in response to stress. And the children with high cortisol levels were more likely to have poor executive function.

"Research indicates that stress from a variety of sources—including crowded and chaotic home and classroom environments, for example, or problems with family or peers—impedes learning," Dr. Blair said. "The potential good news is knowing that stress is a malevolent force means that finding ways to thwart it could boost children's learning capacity."

The researchers are now testing a new program that teaches parents how to engage in scaffolding behavior—to provide opportunities for their children to learn while providing supportive and loving care. The program is also testing a new curriculum that gives preschoolers and kindergarteners more control over their learning activities. In a year, the researchers will compare the children's cortisol levels and executive functioning.

"Although this work is in its early stages, we are encouraged by the possibility that informed changes to environments can boost children's self-control and academic competence, giving many of our youth a far greater chance of succeeding in life," Dr. Blair wrote.