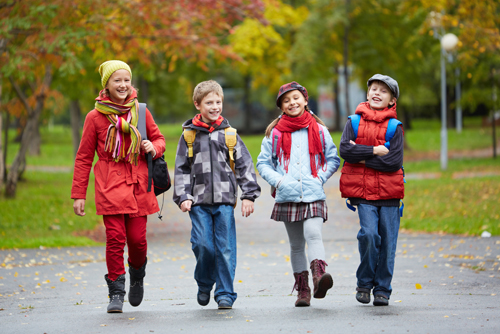 Brief intervals of exercise during otherwise sedentary periods may offset the lack of more sustained exercise and could protect children against diabetes, cardiovascular disease and cancer, according to a small study by researchers at the National Institutes of Health.

Children who interrupted periods of sitting with three minutes of moderate-intensity walking every half hour had lower levels of blood glucose and insulin, compared to periods when they remained seated for three hours. Moreover, on the day they walked, the children did not eat any more at lunch than on the day they remained sedentary.

“We know that 30 minutes or more of moderate physical activity benefits children’s health,” said the study’s senior author, Jack A. Yanovski, M.D., chief of NICHD’s Section on Growth and Obesity. “It can be difficult to fit longer stretches of physical activity into the day. Our study indicates that even small activity breaks could have a substantial impact on children’s long-term health.”

According to the U.S. Centers for Disease Control and Prevention, more than one third of children and adolescents are overweight or obese. Obesity puts children at risk for heart disease, type 2 diabetes, stroke, and several types of cancer.

The study authors noted that U.S. children spend about 6 hours per day in a sedentary position—either sitting or reclining. They added that many studies have linked such sedentary behaviors to obesity and insulin resistance—a risk factor for type 2 diabetes. Still, other research has found that moderate physical activity—such as walking a mile in 15-20 minutes—could lower glucose and insulin levels in adults. The study authors hypothesized that interrupting sitting in children would lower their insulin and glucose levels, as well.

“Sustained sedentary behavior after a meal diminishes the muscles’ ability to help clear sugar from the bloodstream,” said first author, Britni Belcher, PhD, a Cancer Prevention Fellow in NCI’s Health Behavior Research Branch and currently an assistant professor at the University of Southern California. “That forces the body to produce more insulin, which may increase the risk for beta cell dysfunction that can lead to the onset of type 2 diabetes. Our findings suggest even short activity breaks can help overcome these negative effects, at least in the short term.” 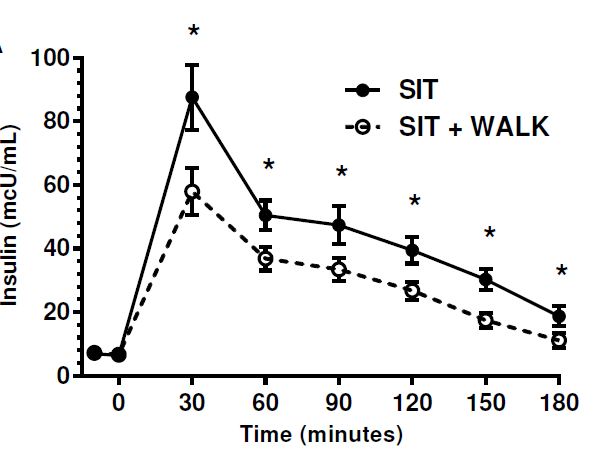 To conduct the study, the researchers enrolled 28 healthy, normal-weight children who came to the NIH in Bethesda, MD from the surrounding area for two experimental visits. The children were assigned at random to participate in one of two groups. Children in the first group remained seated for 3 hours and either watched television, read, or engaged in other sedentary activities. Children in the second group alternated sitting with 3 minutes of moderate-intensity walking on a treadmill (enough to increase their heart rate) every 30 minutes for the 3-hour period. Each of the children returned to the NIH Clinical Center 7 to 30 days later. Those who had remained seated for the full 3 hours during the initial session were switched to the group that had alternated sitting with moderate walking. Similarly, those who earlier took part in the moderate walking group were switched to the sedentary group.

For each session, the children took an oral glucose tolerance test, typically given to pregnant women to check for gestational diabetes. The test involves drinking “glucola,” a soda-like drink containing the sugar glucose. After consuming the drink, participants had their blood tested to see how rapidly their bodies absorb glucose and how much insulin they produce.

On the days they walked, the children had blood glucose levels that were, on average, 7 percent lower than on the day they spent all 3 hours sitting. Their insulin levels were 32 percent lower.   Similarly, blood levels of free fatty acids—high levels of which are linked to type 2 diabetes—were also lower, as were levels of C-peptide, an indicator of how hard the pancreas is working to control blood sugar.

After the sessions, the children were allowed to choose their lunch from food items on a buffet table. Based on the nutrient content of each item, the researchers were able to calculate the calorie and nutrient content of what each child ate. The short, moderate-intensity walking sessions did not appear to stimulate the children to eat more than they ordinarily would, as the children consumed roughly the same amounts and kinds of foods after each of the sessions.

The study authors concluded that, if larger studies confirm their findings, interrupting periods of prolonged sitting with regular intervals of moderate-intensity walking might be an effective strategy for reducing children’s risk of diabetes and heart disease.

Dr. Yanovski added that future studies are needed to examine if working such breaks into school class time could be part of effective strategies to prevent obesity-related illnesses.

The study, “Effects of Interrupting Children’s Sedentary Behaviors with Activity on Metabolic Function: A Randomized Trial,” was published online at https://www.ncbi.nlm.nih.gov/pmc/articles/PMC4596047/