A newborn screening test for severe combined immunodeficiency (SCID) reliably identifies infants with this life-threatening inherited condition, leading to prompt treatment and high survival rates, according to a study supported by the National Institutes of Health. Researchers led by Jennifer Puck, M.D., of the University of California, San Francisco, also found that SCID affects approximately 1 in 58,000 newborns, indicating that the disorder is less rare than previously thought. The study was funded in part by NIH’s National Institute of Allergy and Infectious Diseases (NIAID) and Eunice Kennedy Shriver National Institute of Child Health and Human Development (NICHD). It appears in the Aug. 20 issue of the Journal of the American Medical Association.

SCID is a group of disorders caused by defects in genes involved in the development and function of T cells and other infection-fighting immune cells. Infants with SCID are highly susceptible to life-threatening infections. SCID is fatal, usually within the first year or two of life, unless affected infants are given immune-restoring treatments such as transplants of blood-forming stem cells or gene therapy. More than 80 percent of affected infants do not have a family history of the condition. 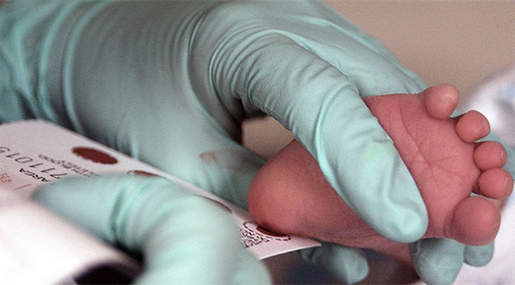 “The results of this study highlight the important role of newborn screening for SCID,” said NIAID Director Anthony S. Fauci, M.D. “The findings demonstrate that detecting SCID before symptoms such as severe infections appear helps ensure that infants with this serious condition receive lifesaving treatments.”

The SCID newborn screening test, originally developed at NIH, measures T cell receptor excision circles (TRECs), a byproduct of T-cell development. Infants with SCID have few or no T cells, regardless of the underlying genetic defect, and the absence of TRECs may indicate SCID. The TREC test also may help doctors identify infants with non-SCID T-cell deficiencies. SCID was added in 2010 to the U.S. Department of Health and Human Services’ Recommended Uniform Screening Panel for newborns in the United States. However, the TREC test has not yet been adopted universally. Nearly half of states conduct newborn screening for SCID, and the test is performed for almost two thirds of infants born across the country.

“We have made great strides in our knowledge of SCID and other related immunodeficiencies in a relatively short period of time, thanks to newborn screening,” said Tiina Urv, Ph.D., a program director in the Intellectual and Developmental Disabilities Branch at NICHD. “Such collaborative research efforts could serve as a model for other disorders.”

The current study evaluated data from more than 3 million newborns gathered by screening programs in 10 states and the Navajo Nation, which spans parts of Arizona, New Mexico and Utah. Navajo have a higher than average risk of SCID, due to certain genetic mutations. Overall, screening detected 52 newborns with SCID, equivalent to 1 in 58,000 infants. All infants with abnormal TREC results underwent further diagnostic testing to confirm SCID. The researchers did not identify any cases of SCID that were missed by TREC screening. Previous estimates, based on limited data, suggested that SCID was less prevalent, affecting only 1 in 100,000 babies.

Early diagnosis allows physicians to treat SCID infants promptly, before infections become overwhelming. Of the 52 SCID infants in the current study, 49 received immune-restoring therapies such as stem cell transplants, enzyme replacement therapy or gene therapy. Three infants died before treatment was given. Four died after receiving transplants, while the other 45 treated infants (92 percent) survived. A recent NIH-funded study showed that SCID infants who received stem cell transplants early in life (less than 3.5 months old) and before the onset of infections had the best outcomes.

“These findings add to the body of evidence demonstrating that prompt treatment for SCID leads to excellent outcomes for infants with this serious disorder,” said Daniel Rotrosen, M.D., director of NIAID’s Division of Allergy, Immunology and Transplantation. “Future clinical studies will address the development of optimal treatment regimens for these newborns.”

Use of the screening test revealed a different distribution of genetic defects underlying SCID than what has been estimated from reports by SCID transplant centers. For example, X-linked SCID, a form of the disorder caused by mutations in a gene on the X chromosome, previously had been thought to account for half of SCID cases, but the researchers found that only 19 percent of newborn-screened SCID infants had X-linked disease. The proportion of SCID infants without a known genetic defect (15 percent) was higher than anticipated, indicating that widespread screening presents opportunities to discover previously unknown genes implicated in SCID.

TREC screening also may benefit infants with non-SCID T-cell deficiencies. Overall, the screening test identified 411 infants with T-cell defects not attributable to SCID. One third of these infants had other inherited conditions in which T-cell impairment can be profound, such as DiGeorge syndrome, which is caused by defects in chromosome 22 that can affect multiple organs. The screening test also identified some infants with other medical conditions that can accelerate loss of T cells, such as congenital heart defects. However, further research is needed to evaluate the usefulness of the TREC test in screening infants for non-SCID conditions.

(contract number HHSN27520080001C) and under contract number HHSN267200603430C and grant number R03HD060311. The Centers for Disease Control and Prevention and numerous state and private agencies, including the Jeffrey Modell Foundation and Immune Deficiency Foundation, also provided support for the study.

About the National Institute of Allergy and Infectious Diseases: NIAID conducts and supports research — at NIH, throughout the United States, and worldwide — to study the causes of infectious and immune-mediated diseases, and to develop better means of preventing, diagnosing and treating these illnesses. News releases, fact sheets and other NIAID-related materials are available on the NIAID Web site at http://www.niaid.nih.gov.