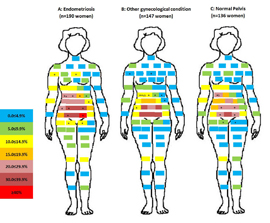 A high proportion of reproductive-age women may be experiencing pelvic pain that goes untreated, according to a study by researchers from the National Institutes of Health and the University of Utah School of Medicine, Salt Lake City.

The researchers surveyed more than 400 women who were scheduled to undergo surgery or imaging for such reasons as infertility, menstrual irregularities, tubal sterilization or pelvic pain. As the researchers expected, reports of pain were highest for women diagnosed with endometriosis, a disorder in which tissue that normally lines the inside of the uterus grows outside of the uterus. However, one-third of those without any pelvic condition also reported a high degree of ongoing pain or pain recurring during the menstrual cycle.

The study, published online in Human Reproduction and was conducted by Karen Schliep, Ph.D., of the Division of Intramural Population Health Research at NIH's Eunice Kennedy Shriver National Institute of Child Health and Human Development.

"Our study suggests that many reproductive-age women are experiencing but not reporting some form of pelvic pain," Dr. Schliep said. "If they aren't doing so already, gynecologists may want to ask their patients if they're experiencing pain, as well as the type and precise location of the pain, and offer treatment as appropriate. Similarly, women should let their doctors know if they're in pain."

The researchers enrolled 473 women ages 18 to 44 years at 14 surgical centers in Salt Lake City and San Francisco. The women were set to undergo either laparoscopy, a surgical procedure which involves inserting a camera at the end of a tube through a tiny incision in the abdomen, or a laparotomy, which involves making a larger incision in the pelvic region. The women were seeking care or treatment for pain, for a mass or lump in the pelvic region, infertility, menstrual irregularities, or for tubal sterilization.

In an interview before their surgery, the women were asked about the kind of pain they had experienced in the past six months, along with its severity. In all, the women were asked if they had more than 17 specific types of pain related to sexual intercourse, their menstrual period, urination or bowel elimination, or other pain, such as muscle or joint pain or migraine headaches.  In addition, they were asked to indicate on diagrams of the pelvic area and of a standing female figure where they felt pain.

More than 30 percent of the women reported that they were experiencing chronic pain and cyclic pain—coinciding with an interval during their monthly menstrual cycle—lasting six months or more. This 30 percent included not only women with pelvic disorders, but also those without any pelvic condition. In addition, regardless of the reason they had surgery or of their diagnosis after the operation, only 3 percent of the total study population reported having none of the 17 types of pain, while over 60 percent reported six or more types of pain.

Among the study participants, approximately 40 percent were diagnosed with endometriosis, and 31 percent with other conditions, including uterine fibroids, ovarian cysts, and tumors. Nearly 29 percent had not been diagnosed with any pelvic conditions.

Women diagnosed with endometriosis experienced the most chronic pain, at slightly more than 44 percent, compared to about 30 percent of women without any pelvic condition. Similarly, women with endometriosis were more likely to experience pain during intercourse, menstrual cramping and pain with bowel elimination. They also were more likely to report vaginal pain and pain in the pelvic-abdominal area.

The study authors called for future research on the type and location of pain associated with endometriosis. Results of such studies might lead to better diagnosis and treatment of the disorder. The authors also called for additional research on the causes of pain in women not diagnosed with any pelvic condition.