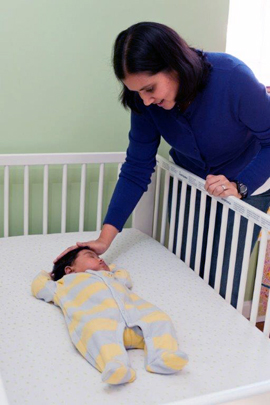 Many new mothers do not receive advice from physicians on aspects of infant care such as sleep position, breastfeeding, immunization and pacifier use, according to a study funded by the National Institutes of Health.

Health care practitioner groups have issued recommendations and guidelines on all these aspects of infant care, based on research which has found that certain practices can prevent disease and even save lives.

The study authors surveyed a nationally representative sample of more than 1,000 new mothers, inquiring about infant care advice they received from doctors, nurses, family members and the news media.

Roughly 20 percent of mothers said they did not receive advice from their doctors regarding current recommendations on breastfeeding or on placing infants to sleep on their backs—a practice long proven to reduce the risk of sudden infant death syndrome (SIDS). More than 50 percent of mothers reported they received no advice on where their infants should sleep. Room-sharing with parents—but not bed-sharing—is the recommended practice for safe infant sleep.

The study appeared in Pediatrics and was conducted by researchers at Boston Medical Center, Boston University, and Yale University, New Haven, Connecticut.

“Earlier studies have shown that new mothers listen to their physicians,” said Marian Willinger, Ph.D.., of the Pregnancy and Perinatology Branch at NIH’s Eunice Kennedy Shriver National Institute of Child Health and Human Development (NICHD), which funded the study. “This survey shows that physicians have an opportunity to provide new mothers with much-needed advice on how to improve infant health and even save infant lives.”

African American women, Hispanic women and first time mothers were more likely to receive advice from their physicians than were white women and mothers of two or more children.

“As a physician, these findings made me stop and really think about how we communicate important information to new parents,” said the study’s first author, Staci R. Eisenberg, M.D., a pediatrician at Boston Medical Center. “We may need to be clearer and more specific in telling new mothers about safe sleep recommendations. From a public health perspective, there is a real opportunity to engage families and the media to promote infant health.”

For the Study of Attitudes and Factors Effecting Infant Care Practices, the researchers enrolled new mothers at delivery from 32 hospitals around the country, with 1031 women eventually taking part in the study. The authors asked the women to complete questionnaires when the infant was between 2 and 6 months of age on advice they received from their infant’s doctor, birth hospital nurses, their family members, and the news media. In addition to finding out whether or not these sources had provided advice on infant care, the questionnaires sought to determine whether the advice was consistent with the recommendations of practitioner groups. 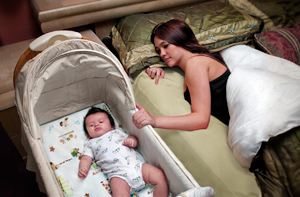 Room sharing—keeping the infant's sleep area in the same room and next to where the caregiver sleeps—is recommended as a way to reduce the risk of SIDS and other sleep-related causes of infant death. Infants should not sleep in an adult bed, on a couch, or on a chair alone, with the parent or caregiver, with siblings or other small children, or with anyone else.

For example, the American Academy of Pediatrics (AAP) recommends that caregivers always place a baby on his or her back for sleep at night and for naps. The women in the study were asked whether they agreed or disagreed with a series of statements on sleep placement: “The nurses at the hospital where my baby was born think that I should place my baby to sleep on the [back, side or stomach.]” If the women agreed with the statement that the baby should be placed to sleep on his or her back, the researchers classified the response as consistent with the AAP recommendation. Agreement with statements on the other placement positions was considered inconsistent with the recommendation.

Physicians and others in a position to offer advice to mothers may fail to do so because they do not know about recommendations or because they disagree with a recommendation, the study authors wrote. Physicians also may be reluctant to give a recommendation they believe is controversial or one that might lead to a lengthy conversation, especially if they are facing time constraints during busy office hours.