Common gene variants account for most genetic risk for autism

Most of the genetic risk for autism comes from versions of genes that are common in the population rather than from rare variants or spontaneous glitches, researchers funded by the National Institutes of Health have found. Heritability also outweighed other risk factors in this largest study of its kind to date.

About 52 percent of the risk for autism was traced to common and rare inherited variation, with spontaneous mutations contributing a modest 2.6 percent of the total risk. 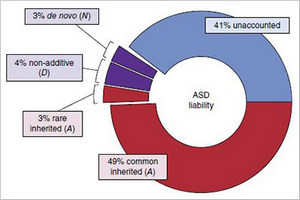 The bulk of risk, or liability, for autism spectrum disorders (ASD) was traced to inherited variations in the genetic code shared by many people. These and other (unaccounted) factors dwarfed contributions from rare inherited, non-additive and spontaneous (de novo) genetic factors. Source: Population-Based Autism Genetics and Environment Study

“Genetic variation likely accounts for roughly 60 percent of the liability for autism, with common variants comprising the bulk of its genetic architecture,” explained Joseph Buxbaum, Ph.D.

, of the Icahn School of Medicine at Mount Sinai (ISMMS), New York City. “Although each exerts just a tiny effect individually, these common variations in the genetic code add up to substantial impact, taken together.”

Buxbaum, and colleagues of the Population-Based Autism Genetics and Environment Study (PAGES) Consortium, report on their findings in a unique Swedish sample in the journal Nature Genetics, July 20, 2014.

“Thanks to the boost in statistical power that comes with ample sample size, autism geneticists can now detect common as well as rare genetic variation associated with risk,” said Thomas R. Insel, M.D., director of the NIH’s National Institute of Mental Health (NIMH). “Knowing the nature of the genetic risk will reveal clues to the molecular roots of the disorder. Common variation may be more important than we thought.”

Although autism is thought to be caused by an interplay of genetic and other factors, including environmental, consensus on their relative contributions and the outlines of its genetic architecture has remained elusive. Recently, evidence has been mounting that genomes of people with autism are prone to harboring rare mutations, often spontaneous, that exert strong effects and can largely account for particular cases of disease.

More challenging is to gauge the collective impact on autism risk of numerous variations in the genetic code shared by most people, which are individually much subtler in effect. Limitations of sample size and composition made it difficult to detect these effects and to estimate the relative influence of such common, rare inherited, and rare spontaneous variation.
Differences in methods and statistical models also resulted in sometimes wildly discrepant estimates of autism’s heritability – ranging from 17 to 50 percent.

Meanwhile, recent genome-wide studies of schizophrenia have achieved large enough sample sizes to reveal involvement of well over 100 common gene variants in that disorder. These promise improved understanding of the underlying biology – and even development of risk-scores, which could help predict who might benefit from early interventions to nip psychotic episodes in the bud.

With their new study, autism genetics is beginning to catch up, say the researchers. It was made possible by Sweden’s universal health registry, which allowed investigators to compare a very large sample of about 3,000 people with autism with matched controls. Researchers also brought to bear new statistical methods that allowed them to more reliably sort out the heritability of the disorder. In addition, they were able to compare their results with a parallel study in 1.6 million Swedish families, which took into account data from twins and cousins, and factors like age of the father at birth and parents’ psychiatric history. A best-fit statistical model took form, based mostly on combined effects of multiple genes and non-shared environmental factors.

“This is a different kind of analysis than employed in previous studies,” explained Thomas Lehner, Ph.D., chief of NIMH’s Genomics Research Branch. “Data from genome-wide association studies was used to identify a genetic model instead of focusing just on pinpointing genetic risk factors. The researchers were able to pick from all of the cases of illness within a population-based registry.”

Now that the genetic architecture is better understood, the researchers are identifying specific genetic risk factors detected in the sample, such as deletions and duplications of genetic material and spontaneous mutations. Even though such rare spontaneous mutations accounted for only a small fraction of autism risk, the potentially large effects of these glitches makes them important clues to understanding the molecular underpinnings of the disorder, say the researchers.

“Within a given family, the mutations could be a critical determinant that leads to the manifestation of ASD in a particular family member,” said Buxbaum. “The family may have common variation that puts it at risk, but if there is also a de novo [spontaneous} mutation on top of that, it could push an individual over the edge. So for many families, the interplay between common and spontaneous genetic factors could be the underlying genetic architecture of the disorder.”

Other lead investigators on the study were: Christina Hultman, Ph.D.

About the National Institute of Mental Health (NIMH): The mission of the NIMH is to transform the understanding and treatment of mental illnesses through basic and clinical research, paving the way for prevention, recovery and cure. For more information, visit http://www.nimh.nih.gov.