Barrett Whitener: It's any parent's worst nightmare: putting the new baby to sleep at night and discovering the next morning that the child has passed away. In the U.S., more than 3,500 infants die each year from sudden infant death syndrome, or SIDS, and from what experts describe as "other sleep-related causes of infant death." Sparing families this incomprehensible tragedy has been a long-term goal of the National Institutes of Health.

From the NIH, I am Barrett Whitener, and this is Research Developments, a podcast from the Eunice Kennedy Shriver National Institute of Child Health and Human Development, the NICHD. 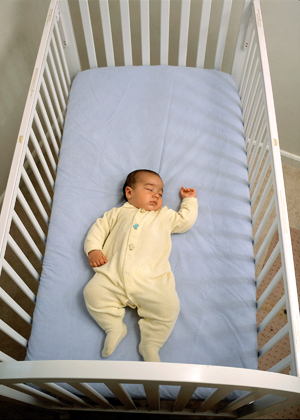 Infants should be placed to sleep alone, on their backs, on a firm sleep surface, such as in a mattress in a safety-approved crib, covered by a fitted sheet. Soft objects, toys, crib bumpers, quilts, comforters and loose bedding should be kept out of the baby’s sleep area.

Sudden infant death syndrome is the sudden death of an infant younger than one year of age that remains unexplained after a complete investigation, which may include an autopsy, a review of the death scene, and a review of family and medical histories. Through the years, NICHD has funded a large body of research into the nature of SIDS, its causes, and how to prevent it. They've learned that some infants may have an inherited vulnerability, an abnormality in how their brains process the chemical serotonin. They have also learned that even the healthiest of infants may be at increased risk of death just from the environment they're sleeping in. We'll talk more about that in a moment.

The good news is that by providing infants with an appropriate sleep environment, it's possible to greatly reduce the risk of SIDS and the risk for what researchers now call "sudden unexpected infant deaths." For more than 20 years, NICHD has run an information campaign to advise parents, caregivers, and health care providers on safe infant sleep practices. Since the campaign began, the number of SIDS deaths has dropped in half across all racial and ethnic groups in the U.S.

The main message of NICHD's Safe to Sleep campaign, originally called the Back to Sleep campaign, is to place infants to sleep on their backs at all times. But given the more recent research, the American Academy of Pediatrics revised its infant sleep recommendations to include the infant's sleep environment as well. Again, this research has shown that how and where your baby sleeps also matters.

Dr. Shavon Artis Dickerson: Yes. Actually, the campaign started in 1994 as a way to really spread messages about the new recommendations that had been released by the American Academy of Pediatrics on promoting back sleeping, and the campaign really resonated with families by having this message called "Back to Sleep." Over the last 20 years, the campaign has worked with health care professionals, parents, and families around the country to really disseminate the health messages around how to keep your baby safe during sleep time, and most recently, in the last couple of years, due to the latest recommendations from the American Academy of Pediatrics, it's been really important for the campaign to convey more than just back sleeping. And so the emphasis on the campaign's message has moved from Back to Sleep to Safe to Sleep; henceforth, the new campaign name.

Mr. Whitener: Does that have to do with the distinction I made a minute ago between sudden infant death syndrome and sudden unexpected infant deaths?

Mr. Whitener: Who are you primarily trying to reach with the Safe to Sleep campaign?

Dr. Artis Dickerson: It's really important that our campaign messages reach parents, caregivers, anyone who is caring for an infant, and also health care providers, because we want to make sure they are giving a consistent message about how an infant should sleep.

Mr. Whitener: Are there groups that are at an increased risk of having an infant die during sleep?

Mr. Whitener: And what messages do you want to make sure through the campaign that parents and caregivers understand?

Dr. Artis Dickerson: We want to make sure everyone who cares for a baby knows that an infant should be placed in a safe sleep environment for every sleep time, including naps. So it's important that a baby is put to sleep on his or her back, with nothing else in the baby's sleep area, no loose blankets, nothing covering—anything that could cover the baby's mouth or nose, or head—no toys, stuffed animals—nothing in the baby's sleep area, and making sure that the baby is placed on a firm mattress.

Mr. Whitener: Do we know how common it is for parents and caregivers to place an infant in an unsafe sleep environment?

Dr. Artis Dickerson: Yes, we do, actually. A recent study showed that 55 percent of infants in the U.S. sleep with potentially unsafe bedding, so it really stresses the need for us to really emphasize the overall sleep environment being safe for infants. And so it's really important that there's nothing in the baby's sleep area—no soft bedding, no blankets, no toys—nothing in the baby's sleep area, and it's really important that we convey that message. So it's not just about back sleeping; it's about the baby's sleep environment.

Mr. Whitener: Now, I know some parents have said or have asked, "Does that mean that I have to check on my baby constantly to make sure the baby is staying on its back while it sleeps?"

Mr. Whitener: Now, you mentioned a moment ago, some qualities of a safe sleep environment. Are there any others that parents and caregivers should be aware of?

Dr. Artis Dickerson: No. The main messages are to make sure that the baby is on his or her back, with nothing in the sleep area, on a firm mattress in his own sleep area. And we also like to promote room-sharing, where a baby is placed to sleep in the same room where the parents sleep, which allows for monitoring as well as feeding the baby, and particularly for feeding the baby, we would recommend actually placing the baby's sleep area right next to where the parent sleeps, so they can easily feed the baby through the night.

Mr. Whitener: So just to kind of underscore that point, room-sharing, as opposed to co-sleeping, which is having the infant in the same bed with the parents.

Dr. Artis Dickerson: Yes. And it's important to define those terms, because co-sleeping could include room-sharing or bed-sharing, and a part of the campaign's message is to really promote making sure that the baby his or her own sleep area and placing the baby in the same room where the parents sleep and not bed-sharing. And we understand that can be a very complicated message, and so it's really important to really look at what's the best way to create a safe sleep environment for your baby, and that is to have the baby in his or her own sleep area in the same room, and to facilitate feeding or monitoring, placing that baby's sleep area next to where the parent is sleeping.

Mr. Whitener: And for the parents who say, "But that's such a great bonding experience, sharing the same sleep"—you know, the same mattress with the infant, how do you respond? What are the dangers, specifically, of doing that?

Dr. Artis Dickerson: Well, there are several reasons why it can be dangerous to have the baby sleeping on the same surface with a parent, or anyone else, for that matter, and that is the risk for accidental suffocation. There's the possibility of pillows, blankets covering the baby's mouth or nose or head, and also, you want to make sure that the baby is on a firm sleep mattress because if the baby rolls over, they could roll over onto a soft mattress where they actually—their face or nose becomes buried in the mattress. And most adult mattresses are not on the same standard of what an infant's mattress would be, which should be firm.

And so it's really important that you have a safe sleep environment, so you can reduce the risk of your baby dying from SIDS or accidental suffocation, which we really want to make sure we educate all families and parents about the importance of following safe sleep recommendations.

Mr. Whitener: And for parents and caregivers who think, "Well, occasionally, I may fall asleep with the child close by," what do you say to them?

Dr. Artis Dickerson: We understand it's a challenge, and those nights or nap times may happen in that way. But I think what's most important, that parents or anyone who is caring for an infant knows, that they must intentionally practice safe sleep behaviors, and that you place a baby in a safe sleep environment every time. And we know that you're tired, and it will be difficult, but it's about practice and getting in the habit of practicing safe sleep behaviors, and that's really most important. That's what we really want to convey to families.

Mr. Whitener: Now, I mentioned earlier about the tremendous accomplishment of reducing the SIDS rate by half. That is just amazing, and I wonder, what do you think accounts for that success?

Dr. Artis Dickerson: I think there are two things. One, when the campaign first started, it was really important for everyone (to) hear, that it was important for everyone who cares for a baby to place the baby on his or her back. And we are aware of the latest research that shows that 72 to 73 percent of babies are placed on their backs now, and we really believe that's due to not only the national campaign, but many state and local campaigns that have occurred around the country to promote the back-sleeping message.

And a lot of work has been done to educate families in the communities across the country on the importance of safe sleep messages, and I believe that because the word has gotten out in the dissemination of these important safe sleep messages, families are listening, and they're changing how they are putting their infants to sleep. And as a result, we're seeing a reduction in the number of infants dying from SIDS, which is a great accomplishment, but we still have much more work to do.

Mr. Whitener: For parents or caregivers who may be listening and want to spread this message to others, is there a resource or a site they can visit for more information?

Dr. Artis Dickerson: Yes. We want everyone to know about the Safe to Sleep campaign's website, which is safetosleep.nichd.nih.gov, and it's a great resource to read more about the campaign as well as read about safe sleep messages that they can educate themselves on, why it's important to follow.

Mr. Whitener: Is there anything else about the campaign or safe infant sleep you'd like to share?

Dr. Artis Dickerson: We just want to make sure that everyone knows about safe sleep messages, so that when they're caring for an infant, they can place the infant in a safe sleep environment. This means parents. This means siblings, grandparents, aunties, uncles. Anyone who's caring for an infant should be aware of the safe sleep recommendations that are established by the American Academy of Pediatrics. The Safe to Sleep campaign's total mission and goal is to make sure that everyone knows about how to place an infant safe to sleep.

Mr. Whitener: Well, thanks so much again for joining us, Dr. Artis Dickerson.

Dr. Artis Dickerson: Thank you for having me.