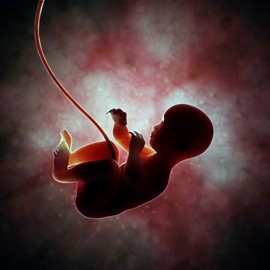 A technique to increase the flow of blood from the umbilical cord into the infant’s circulatory system improves blood pressure and red blood cell levels in preterm infants delivered by cesarean section, according to a study funded by the National Institutes of Health.

The study, published online in Pediatrics, was conducted by researchers at the Neonatal Research Institute at Sharp Mary Birch Hospital for Women and Newborns in San Diego, and Loma Linda University, Loma Linda, California. It was supported by NIH’s Eunice Kennedy Shriver National Institute of Child Health and Human Development (NICHD).

The technique, known as cord milking, consists of encircling the cord with thumb and forefingers, gently squeezing, and slowly pushing the blood through the cord to the infant’s abdomen. For infants delivered by cesarean, cord milking appears to offer benefits over the standard practice of waiting 45 to 60 seconds before clamping and then cutting the umbilical cord. These benefits, which include greater blood flow to and from the heart, higher red blood cell level, and higher blood pressure, were seen only in the infants delivered by cesarean. Among a smaller number of vaginal births, the researchers found no difference in blood volume between infants undergoing cord milking and those undergoing delayed cord clamping.

“The study results are very encouraging,” said Tonse Raju, M.D., chief of NICHD’s Pregnancy and Perinatology Branch. “The findings need to be confirmed in a larger number of births, but at this point, it appears that umbilical cord milking may prove to be of great benefit to preterm infants delivered via cesarean.”

The study authors note that in 2012, the American College of Obstetricians and Gynecologists recommended

Delaying umbilical cord clamping by 30 to 60 seconds is thought to allow sufficient time for blood from the umbilical cord to fill the blood vessels in the infant’s lungs, Dr. Raju explained in an earlier podcast.  Among preterm infants, the delay is believed to protect from intraventricular hemorrhage, or bleeding in the ventricles—the cavities inside the infant’s brain. The hemorrhage is thought to result from low blood pressure, brought on by having too little blood in the circulatory system.  Bleeding in the brain may result in developmental delays, cerebral palsy, and in severe cases, death.

However, Dr. Anup C. Katheria, M.D., a neonatologist at the Neonatal Research Institute at the Sharp Mary Birch Hospital and the study’s first author, noted that some studies failed to find a reduction in intraventricular hemorrhage from delayed cord clamping among preterm infants delivered by cesarean.  The scientists theorized that the use of an anesthetic in cesarean delivery reduces uterine contractions, and in so doing hinders the exodus of blood from the umbilical cord. Cord milking, they reasoned, might compensate for diminished blood flow through the umbilical cord and increase the amount of blood available to the infant.

The researchers enrolled 197 infants in their study. Mothers went into labor at or before the 32nd week of pregnancy. Of these, 154 were delivered by cesarean, with 75 assigned at random to the umbilical cord milking group and 79 assigned to the delayed clamping group. The 43 infants delivered vaginally also were assigned at random to either delayed clamping or umbilical cord milking.

Of the infants undergoing cesarean deliveries, those in the cord milking group had higher blood flow in the superior vena cava, the large vein carrying blood from the brain to the heart, and a higher output of blood from the right ventricle. The two measures, taken together, are an indication of blood circulation in the brain and body. Infants in the cord milking group also had higher blood pressure and higher levels of hemoglobin—a protein used as an indicator of the quantity of red blood cells.

Among the smaller number of infants that were delivered vaginally, the researchers found no differences in the blood volume or blood pressure between the two groups.