Only about half of U.S. adolescents are physically active five or more days of the week, and fewer than 1 in 3 eat fruits and vegetables daily, according to researchers at the National Institutes of Health.

In a survey of youth in 39 states, NIH researchers questioned nearly 10,000 students between 11 and 16 years old about their activity levels and eating habits.  They also asked the students to describe their emotional health, body image, and general satisfaction with life.

“The students showed a surprising variability in eating patterns,” said lead author Ronald J. Iannotti, Ph.D., of the Prevention Research Branch of the Eunice Kennedy Shriver National Institute of Child Health and Human Development (NICHD), the NIH Institute in which the study was conducted.  “But most—about 74 percent—did not have a healthy pattern.”

Dr. Iannotti conducted the research with NICHD colleague Jing Wang, Ph.D.  In addition to NICHD, funding also was provided by the Maternal and Child Health Bureau of the Health Resources and Services Administration.

Their findings appear in the Journal of Adolescent Health.

The researchers surveyed participants about: their daily amount of physical activity, the amount of time they spent in front of a computer screen or other electronic screen, and the amount of healthy and unhealthy foods they consumed. Other questions sought information on symptoms of depression and self-satisfaction with their bodies.

The analysis of the survey results showed that the typical youth were least likely to exercise five or more days each week or to eat fruits and vegetables at least once a day.  They were more likely to spend time watching television, playing video games or on a computer than the healthful group, and less likely to do so than the unhealthful group.  They infrequently ate fruits and vegetables but also infrequently ate sweets, chips or fries, or had soft drinks.  Youth in this group were more likely than youth in the other two groups to be overweight or obese and to be dissatisfied with the appearance of their bodies. 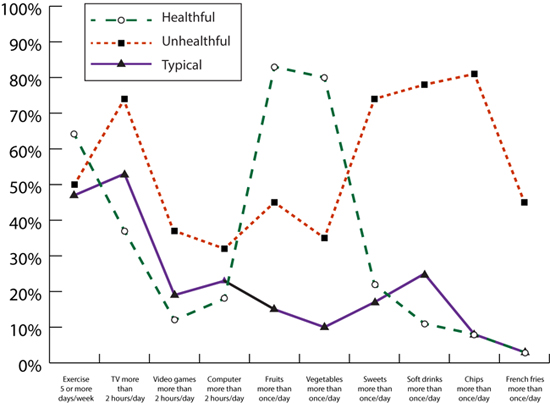 NIH researchers charted patterns of physical activity, screen time and diet after surveying 10,000 students between 11 and 16 years old. The researchers classified these patterns as typical, unhealthful and healthful.

Nearly 65 percent of students in the group that the researchers termed healthful reported exercising five or more days per week—the highest rate of the three groups.  These students were least likely to spend time in front of a screen and were most likely to report eating fruits and vegetables at least once a day.  Students in this group also were least likely to consume sweets, soft drinks, chips and French fries.  They reported the lowest rates of depressive symptoms and the highest life satisfaction ratings.

All three groups could stand to improve their health habits, Dr. Iannotti said, whether walking or biking between home and school or eating more fresh produce each day.

According to the U.S. Department of Health and Human Services’ Physical Activity Guidelines for Americans, children and adolescents should get one hour or more of moderate or vigorous aerobic physical activity a day, including vigorous intensity physical activity at least three days a week.