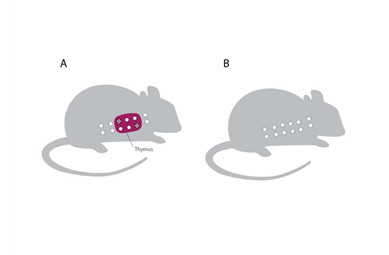 Researchers can create a condition resembling autoimmune-related primary ovarian insufficiency. Early in life, the thymus teaches immune system cells called T cells to recognize the body’s own tissues. T cells that would attack the body are either destroyed in the thymus or other cells that can regulate and suppress their activity are created (A). In this study, researchers removed the thymuses of mice when they were 2 to 4 days old. As a result, T cells that would target the body’s own tissue were insufficiently regulated. The mice developed a condition resembling autoimmune-related primary ovarian insufficiency.

In a study of mice, researchers have slowed an immune system attack on the ovaries. The mice developed a disorder resembling primary ovarian insufficiency (POI), a menopause-like condition that affects women under the age of 40, sometimes years or even decades before normal menopause. The study was conducted by scientists at the National Institutes of Health and the University of California, San Francisco (UCSF).

The study confirms that the protein is the main target of the autoimmune attack. The ovarian protein, known as MATER, is found in the egg cell. MATER (maternal antigen that embryos require) is essential for the egg cell to divide beyond the two-cell stage after fertilization.

The study results may one day lead to a way to identify women with a high probability for developing autoimmune POI early, perhaps in time to explore fertility-sparing options such as frozen embryo storage, or freezing unfertilized eggs. POI affects about 1 percent of women under the age of 40 in the United States, according to the authors.

"Our results indicate that MATER is a primary target of the immune assault on the ovary in mice," said senior author Lawrence M. Nelson, M.D., head of the Integrative Reproductive Medicine Group at the NIH’s Eunice Kennedy Shriver National Institute of Child Health and Human Development (NICHD). "If further research confirms that MATER is a primary target of autoimmune-related POI in women, then it may be possible to develop a test to predict if a woman is likely to develop the condition."

The findings appear online in Endocrinology. 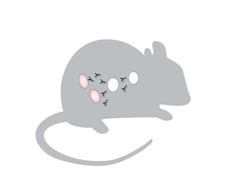 T-cells in thymus deficient mice fail to recognize that the ovary is part of the body. The T cells instruct cells known as B-cells to make antibodies against the ovaries. Antibodies are Y-shaped proteins that tag molecules for later destruction by the immune system.

Researchers can create a condition resembling autoimmune POI in mice by removing the animals’ thymus glands when they are 2 to 4 days old. In early life, the thymus teaches the immune system to distinguish the body’s own tissues from disease-causing microbes and other potentially harmful organisms and substances, Dr. Nelson explained. Molecules on the surface of the body’s cells serve as signals for the young immune cells. These molecules are called major histocompatibility complex, or MHC, proteins. In the thymus, immune system cells called T cells learn that cells covered with MHC protein complexes are part of the body—and off limits to an immune attack. T cells that might attack the MHC protein complexes are eliminated in the thymus or regulated by other cells generated in the thymus.

T cells in the thymus-deficient mice fail to recognize that the ovary is part of the body and so unleash an immune attack on the ovary. Among the immune cells that join the attack are B cells. B cells produce proteins known as antibodies. Like miniature guided missiles, antibodies seek out proteins and bind to them, tagging them for later destruction by the immune system.

In the mice deprived of thymus glands, T cells erroneously consider MATER to be a foreign protein and instruct B cells to make antibodies against it. 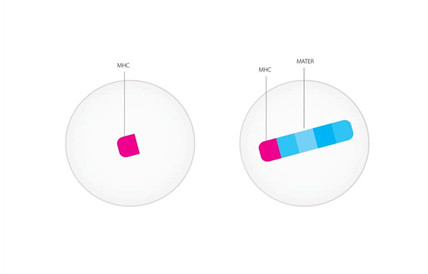 In the thymus, T cells learn that cells covered with MHC protein complexes are part of the body—and off limits to an immune attack. The researchers altered the animals’ MHC genes so that they produced parts of MATER on the surface of their cells, along with MHC. The alteration lessened the immune attack on the ovaries.

Both groups of mice had antibodies to other ovarian proteins. Dr. Nelson explained that these proteins have not yet been identified.

"Our findings show that MATER is a main target of the immune attack in these mice, but not the only target," Dr. Nelson said.

Dr. Nelson added that the mouse MATER protein has a human counterpart, a protein known as NALP5. Some women with POI have antibodies to NALP5. It may be possible, Dr. Nelson said, to diagnose women at risk for the immune form of POI by testing for the NALP5 antibody.

"The hope is that we could get them into treatment early enough to consider fertility-sparing options," he said.