Researchers have found that hormone replacement therapy in young women with primary ovarian insufficiency (POI) led to increases in their bone mineral density, restoring levels to normal. The study was supported by the Eunice Kennedy Shriver National Institute of Child Health and Human Development (NICHD), part of the National Institutes of Health.

The findings provide important treatment information for women with POI and their physicians.

Spontaneous POI, which affects 1 in 100 women by age 40, occurs when the ovaries stop producing sufficient estrogen in the absence of a known cause, such as anorexia, chromosome abnormality, or chemotherapy. It is typically characterized by irregular or absent menstrual cycles, hot flashes, and fertility problems. Women with POI have abnormally low levels of reproductive hormones, including estradiol, a type of estrogen produced by the ovary, as well as testosterone, a predominantly male hormone, but also produced by women in smaller amounts. They also have reduced bone mineral density, which can lead to osteoporosis and bone fractures.

“Bone mineral density is an important measure of bone health. This study showed that not only could hormone treatment reduce the rate at which women with POI lose bone mineral density, but it could actually restore bone density to normal levels,” said Dr. Lawrence M. Nelson, study author and investigator in the Program on Reproductive and Adult Endocrinology at NICHD. The findings were published online in the Journal of Clinical Endocrinology & Metabolism. 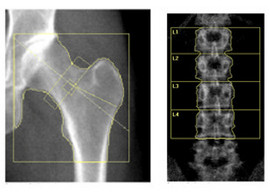 Researchers at the NIH examined scans of the hip and lower spine to determine the effects of hormone treatment on bone mineral density of women with primary ovarian insufficiency.

However, the addition of testosterone in the treatment regimen did not prove to be statistically significant in helping increase bone mineral density. Further studies with a greater number of women would be needed to produce statistically valid results as to whether testosterone replacement could benefit women with POI, Dr. Nelson said.

“While hormone replacement therapy’s effect on bone mineral density has been studied in postmenopausal women, there is limited research on the effects of this therapy in younger women,” said lead author Dr. Vaishali B. Popat, an endocrinologist who helped conduct this study at NIH. “This study provides important evidence that hormone replacement therapy with an appropriate dose of estradiol delivered via a skin patch combined with oral progestin can improve bone density to normal in women with primary ovarian insufficiency.”

The study took place at the NIH Clinical Center in Bethesda, Maryland.