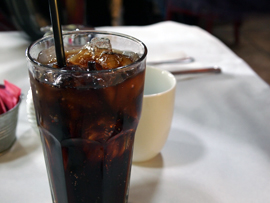 According to the study authors, as the volume of amniotic fluid increases, pregnant women tend to increase their consumption of fluids. To avoid extra calories, many pregnant women replace sugar-sweetened soft drinks and juices with beverages containing artificial sweeteners. Citing prior research implicating artificially sweetened beverages in weight gain, the study authors sought to determine if diet beverage consumption during pregnancy could influence the weight of children.

“Our findings suggest that artificially sweetened beverages during pregnancy are not likely to be any better at reducing the risk for later childhood obesity than sugar-sweetened beverages,” said the study’s senior author, Cuilin Zhang, Ph.D., in the Epidemiology Branch at NIH’s Eunice Kennedy Shriver National Institute of Child Health and Human Development (NICHD). “Not surprisingly, we also observed that children born to women who drank water instead of sweetened beverages were less likely to be obese by age 7.”

The researchers analyzed data collected from 1996 to 2002 by the Danish National Birth Cohort, a long-term study of pregnancies among more than 91,000 women in Denmark. At the 25th week of pregnancy, the women completed a detailed questionnaire on the foods they ate. The study also collected data on the children’s weight at birth and at 7 years old.

In the current study, the NICHD team limited their analysis to data from more than 900 pregnancies that were complicated by gestational diabetes, a type of diabetes that occurs only during pregnancy.

It is not well understood why drinking artificially sweetened beverages compared to drinking water may increase obesity risk. The authors cited an animal study that associated weight gain with changes in the types of bacteria and other microbes in the digestive tract. Another animal study suggested that artificial sweeteners may increase the ability of the intestines to absorb the blood sugar glucose. Other researchers found evidence in rodents that, by stimulating taste receptors, artificial sweeteners desensitized the animals’ digestive tracts, so that they felt less full after they ate and were more likely to overeat.