Todd Macfarlan, Ph.D, a biologist at the National Institutes of Health, was one of 102 researchers who received the Presidential Early Career Award for Scientists and Engineers, the highest honor bestowed by the United States Government on science and engineering professionals in the early stages of their independent research careers.

Dr. Macfarlan heads the Unit on Mammalian Epigenome Reprogramming, at the NIH's Eunice Kennedy Shriver National Institute of Child Health and Human Development.  He received the award for his work with embryonic stem cells.  While a postdoctoral fellow at the Salk Institute for Biological Studies in La Jolla, Calif., he and his colleagues discovered

that a large number of genes fostering the division of early stage mouse embryo cells were being controlled by ancient viruses, incorporated into the cells' own DNA after a long ago infection.

The work has implications for the effort to harness stem cells to repair malfunctioning tissues and organs, and may also lead to insights into how cancers begin as well as how harmful viruses, like HIV, cause disease.

"These ancient viruses give the embryonic stem cells the ability to shift in and out of a phase in which they can develop into any kind of cell in the embryo, including the placenta," said Dr. Macfarlan.  In addition to continuing his work in understanding how these viruses influence embryo development, Dr. Macfarlan is also investigating the specialized means that the embryo uses to prevent dormant viruses from becoming active again.

In mammals, Dr. MacFarlan explained, a sperm fertilizes an egg, and the cell that results is called a  zygote.  Next, the zygote divides, forming two daughter cells.

"These two daughter cells are unique," Dr. MacFarlan said.  "They're capable of developing into all of the various kinds of cells that will eventually come to make up the developing embryo, as well as the placenta." 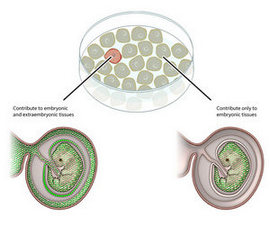 At left, an embryo grown from a single cell in which the viral genes have been turned on, endowing the cell with the ability to turn into either a cell of the embryo or a placental cell. The embryo at right resulted from a cell in which these genes had been turned off, and so only gave rise to embryonic cells.

In their research, Dr. MacFarlan and his colleagues were investigating the genes that endowed the second stage daughter cells with the potential to develop into other cell types, when they made a discovery that surprised them.

"We found that viral genes that had been incorporated into the mouse genetic material millions of years were very active at in the two cell stage of development," Dr. MacFarlan said.

This activity resulted from sections of viral DNA called promoters.  Promoters are lengths of DNA located near genes.  They help to switch genes on so that the genes begin the process of making proteins.  In this case, however, the promoters were from retroviruses.  The promoters were not only activating other retroviral genes' among the mouse DNA, but were also switching on hundreds of other genes as well.

Research on the functions of these genes may hold the key to understanding the cells' potential to turn into other cell types.  Researchers hope to use such unspecialized cells to regenerate new tissues and organs to repair everything from damaged hearts to regenerating injured spinal cords.

Dr. Macfarlan explained that the viral genes he and his coworkers studied were retroviruses, which insert their own genes into the DNA of a cell.  The cell then follows the viral DNA's instructions to manufacture new copies of the original virus.  Sometimes, he added, the host cell manages to mount a successful counter attack, locking the viral DNA down so it can no longer take advantage of the cell's genetic machinery.  Eventually, the retroviral DNA is reduced to harmless baggage, passed down from generation to generation, and having no apparent function.  In fact, Dr. Macfarlan said, nearly 10 percent of all human DNA originally came from such long ago viral infections.

"What astonished us is that the embryo does not always silence the virus, but apparently relies upon the viral promoters at such crucial times in development," Dr. Macfarlan said.

Originally from Levittown, Pennsylvania, Dr. Macfarlan earned his Ph.D in Cell and Molecular Biology from the University of Pennsylvania in 2005.  Before coming to the NIH in 2012, he joined the Salk Institute for Biological Studies as a postdoctoral research fellow.