Cells ingest proteins and engulf bacteria by a gymnastic, shape-shifting process called endocytosis. Researchers at the National Institutes of Health revealed how a key protein, dynamin, drives the action.

Step 2: The membrane bends inward like a catcher’s mitt to receive the cargo.

Step 3: Coils of dynamin protein (orange) seal the cargo into a compartment within the cell. The current research reveals new details about this part of the process.

Step 4: At the completion of endocytosis, the cell has fully internalized the cargo within a bubble known as a vesicle.

Download the high-resolution version of the illustration
(JPG - 945 KB)

Endocytosis lets cells absorb nutrients, import growth factors, prevent infections and accomplish many other vital tasks. Yet, despite decades of research, scientists don’t fully understand this membrane remodeling process. New research reveals, on the real-life scale of nanometers, how individual molecules work together during a single act of endocytosis.

“We’ve discovered new details about a basic process used in all sorts of ways by every cell in the body,” said co-author Joshua Zimmerberg, M.D., Ph.D., head of the Program in Physical Biology at the Eunice Kennedy Shriver National Institute of Child Health and Human Development (NICHD), where the research was conducted. “It’s the culmination of a 30-year journey.”

The research was led by Vadim Frolov, Ph.D., a former postdoctoral fellow in Dr. Zimmerberg’s lab. It appears in a Science paper co-authored by an international team of researchers in the United States, Spain, Russia and India.

In addition to funding Dr. Zimmerberg, NIH also supported the work through a grant from the National Institute of General Medical Sciences (NIGMS) to co-author Sandra Schmid, Ph.D. at the University of Texas Southwestern Medical Center in Dallas. Dr. Schmid is an expert on dynamin.

Scientists have known for years that dynamin plays the major role in endocytosis. After other molecules known as coat proteins pinch the cell’s membrane to form an inward-puckering sac, dynamin wraps, python-like, around the neck of the sac and squeezes it tightly. A jolt of energy from a molecule called GTP severs the neck, releasing a free-floating bubble, called a vesicle, inside the cell, and sealing the cell’s outer membrane shut. All the while, neither the cell nor the vesicle leak any of their contents. 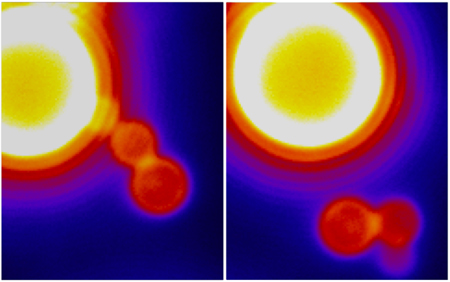 Scientists studying dynamin use an artificial membrane (orange) to analyze the protein’s action. In the first image, dynamin squeezes the membrane to create two vesicle-like structures (lower right). In the second image, taken seconds later, dynamin has severed the membrane to release these structures.

Download the high-resolution version of the image (TIFF - 3 MB)

Drs. Zimmerberg, Schmid and colleagues discovered how the cell overcomes a seemingly insurmountable energy barrier to accomplish this feat. It’s not a matter of brute force, as previously suspected, but something much more zen-like—molecular cooperation.

Neck severing starts when dynamin dips slightly into the pliable cell membrane. Lipids (oily molecules) in the membrane move aside, shifting their tails to accommodate the protein. This molecular crowding stresses the membrane, further constricting the neck of the developing vesicle.

Then GTP finishes the job. But not, as you might expect, with a fatal tug of the dynamin noose. Rather the opposite: Like a yoga instructor, GTP encourages the membrane to relax, despite its extreme stress. In the middle of this state of relaxation, the vesicle suddenly pinches off.

In trying to understand this counterintuitive move, the researchers speculate that GTP melts the inside of dynamin a bit, turning the protein into a flexible scaffold that stabilizes the membrane while the lipids rearrange themselves.

“We see no other way to lower the energy barrier to remodeling without having any leaks,” states Dr. Frolov, who formulated the idea.

The researchers also found that, without access to GTP, dynamin will keep growing, twisting three or four times around the neck of the sac. When GTP is present (as is the case in living organisms), it only lets dynamin coil once or twice before it snaps off the vesicle.

All of this information helps scientists better understand a process critical to life.

Genetic defects in endocytosis—and the reverse process, exocytosis—are linked to a host of human diseases, including muscular dystrophy, Alzheimer’s disease, leukemia and many others. In addition, some parasites and other pathogens can hijack endocytosis, commandeering the process to enter and infect human cells.

Dr. Zimmerberg is bringing his basic research findings to the clinic. He is studying changes in muscle cell membranes in people who have an adult-onset form of muscular dystrophy. In the disease, the membrane around muscle cells weakens and tears. Eventually, cells with damaged membranes die, leaking a number of enzymes into the bloodstream. Dr. Zimmerberg hopes to identify changes in blood chemistry that shed light on the disease process and point to possible new treatments. The study soon will begin recruiting patients as volunteers.

This research was supported in part by the intramural program of the NICHD and by NIGMS grant GM42455.

About the National Institute of General Medical Sciences (NIGMS): NIGMS supports basic research to increase our understanding of life processes and lay the foundation for advances in disease diagnosis, treatment and prevention. For more information on the institute's research and training programs, see http://www.nigms.nih.gov.