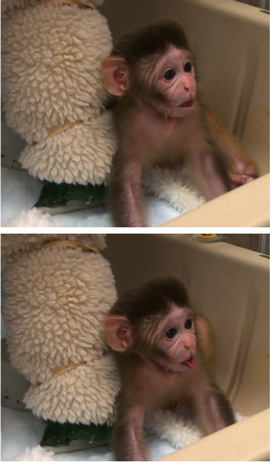 The hormone oxytocin appears to increase social behaviors in newborn rhesus monkeys, according to a study by researchers at the National Institutes of Health, the University of Parma in Italy, and the University of Massachusetts Amherst.  The findings indicate that oxytocin is a promising candidate for new treatments for developmental disorders affecting social skills and bonding.

Oxytocin, a hormone produced by the pituitary gland, is involved in labor and birth and in the production of breast milk.  Studies have shown that oxytocin also plays a role in parental bonding, mating, and in social dynamics.  Because of its possible involvement in social encounters, many researchers have suggested that oxytocin might be useful as a treatment for conditions affecting social behaviors, such as autism spectrum disorders.  Although oxytocin has been shown to increase certain social behaviors in adults, before the current study it had not been shown to do so in primate infants of any species.

Working with infant rhesus monkeys, the NIH researchers found that oxytocin increased two facial gestures associated with social interactions— one used by the monkeys themselves in certain social situations, the other in imitation of their human caregivers.

“It was important to test whether oxytocin would promote social behaviors in infants in the same respects as it appears to promote social interaction among adults,” said the study’s first author, Elizabeth A. Simpson, Ph.D., postdoctoral fellow of the University of Parma, conducting research in the Comparative Behavioral Genetics Section of the NIH’s Eunice Kennedy Shriver National Institute of Child Health and Human Development.  “Our results indicate that oxytocin is a candidate for further studies on treating developmental disorders of social functioning.”

The study was published online in Proceedings of the National Academy of Sciences.

The researchers began by gauging the ability of rhesus macaques to imitate two facial gestures: lip smacking and tongue protrusion.  In lip smacking, the lips are protruded and open, then smacked together repeatedly.  The study authors wrote that rhesus mothers will engage in this facial gesture with their infants in the first month after giving birth.  Tongue protrusion involves a brief protrusion and retraction of the tongue.  Although this gesture is seen in other primates and typically not seen in macaques, macaques will imitate it when their human caregivers display it, the study authors added.

By observing the monkeys’ ability to imitate the two gestures, the researchers sought to determine if oxytocin could promote social interaction through a gesture that was natural to them as well as through a gesture not part of their normal communication sequence.

Beginning in the second week of life, the researchers tested the monkeys on two separate days.  The infant monkeys inhaled an aerosolized dose of oxytocin in one session, and a dose of saline in the other.  In each session, the dose was delivered through an inhalation mask held gently over the animal’s face.

Overall, the monkeys were more communicative after receiving oxytocin, more frequently making facial gestures, than they were after receiving the saline.  The monkeys were more likely to engage in lip smacking than tongue protrusion, but were more likely still to engage in either of these gestures after oxytocin than after the saline.  There also were differences in the frequency of gesturing among the individual monkeys, with the strong imitators becoming even stronger imitators after receiving oxytocin.

After oxytocin exposure, the strong imitators were more likely to look at caregivers and stand close to them than they were after the saline.  Looking into a caregiver’s face and remaining in close proximity to a caregiver are indicators of social interaction and social interest, Dr. Simpson said.

In another test, the researchers found that after exposure to oxytocin, monkeys had lower levels of cortisol in their saliva.  Cortisol is produced by the adrenal glands in response to stress.  Lower cortisol levels after oxytocin exposure indicate that oxytocin may also function to diminish anxiety, the researchers wrote.