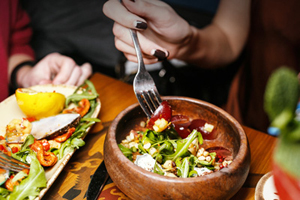 Sticking to a healthy diet in the years after pregnancy may reduce the risk of high blood pressure among women who had pregnancy-related (gestational) diabetes, according to a study by researchers at the National Institutes of Health and other institutions.

The study was published in Hypertension.

“Our study suggests that women who have had gestational diabetes may indeed benefit from a diet rich in fruits, vegetables, and whole grains and low in red and processed meats,” said the study’s senior author, Cuilin Zhang, M.D., Ph.D., a senior investigator in the Epidemiology Branch of NIH’s Eunice Kennedy Shriver National Institute of Child Health and Human Development (NICHD).

Funding for the study also was provided by NIH’s National Institute of Diabetes and Digestive and Kidney Diseases and National Cancer Institute.

Approximately 5 percent of pregnant women in the United States develop gestational diabetes, despite not having diabetes before becoming pregnant. The condition results in high blood sugar levels, which can increase the risk of early labor and a larger than average baby, which may result in problems during delivery. For most women with the condition, blood sugar levels return to normal after birth.  However, later in life, women who had gestational diabetes are at higher risk for type 2 diabetes and high blood pressure.

To conduct the study, the researchers analyzed the health histories of nearly 4,000 women participating in the Nurses’ Health Study II, part of the Diabetes & Women’s Health study. Every four years, study participants responded to questionnaires on their eating habits. When appropriate, the researchers categorized the women’s responses according to three healthy dietary approaches: the Alternative Healthy Eating Index, Mediterranean-style Diet, and the Dietary Approaches to Stop Hypertension (DASH). These approaches emphasize consumption of nuts, legumes, whole grains and fish, and limit consumption of red and processed meats, salt, and added sugars.

After they statistically accounted for smoking, family history, and other factors known to increase high blood pressure risk, the researchers found that women who adhered to a healthy diet were 20 percent less likely to develop high blood pressure than those who did not.

“High blood pressure affects about 30 percent of U.S. adults and increases the risk for heart disease, kidney disease, and stroke,” Dr. Zhang said. “Our study shows that a healthful diet is associated with decreased high blood pressure in an at-risk population.”