Discovery by NIH-supported researchers may lead to diagnostic test, treatment 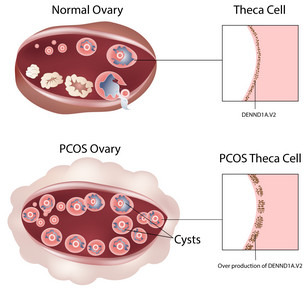 Top: Normally, the egg matures inside a spherical structure called a follicle. When the egg is mature, the follicle ruptures and the egg is released. The inside surface of follicles are lined with theca cells, which produce the protein DENND1A.V2, involved in the production of male hormones. Bottom: In polycistic ovary syndrome (PCOS), follicles fail to mature and form cyst-like structures. In the current study, the researchers determined that in women with PCOS, theca cells produce a much greater quantity of DENND1A.V2. In a series of experiments, the researchers found that the protein led to the production of high levels of male hormones—a characteristics of PCOS.

A variant in a gene active in cells of the ovary may lead to the overproduction of androgens—male hormones similar to testosterone— occurring in women with polycystic ovary syndrome (PCOS), according to scientists funded by the National Institutes of Health.  The discovery may provide information to develop a test to diagnose women at risk for PCOS and also for the development of a treatment for the condition.

In addition to high levels of androgens, symptoms of PCOS include irregular menstrual cycles, infertility, and insulin resistance (difficulty using insulin.) The condition affects approximately 5 to 7 percent of women of reproductive age and increases the risk for heart disease, high blood pressure and type 2 diabetes.  In PCOS, higher levels of androgens may also cause excess facial and body hair, as well as severe acne.

“PCOS is a major cause of female infertility and is associated with other serious health problems,” said Louis V. De Paolo, chief of the Fertility and Infertility Research Branch of NIH’s Eunice Kennedy Shriver National Institute of Child Health and Human Development, which funded the study. “In identifying this gene, the study authors have uncovered a promising new lead in the long search for more effective ways to diagnose and treat the condition, and perhaps, to one day prevent it from even occurring.”

The study was published online in the Proceedings of the National Academy of Sciences.  The study’s primary author was Jan M. McAllister, Ph.D, professor of pathology, obstetrics and gynecology, and cellular and molecular physiology in the Penn State College of Medicine, Hershey, Pa.

The researchers narrowed their search to the gene called DENND1A, which contains the information needed to make a protein.  This protein is made in theca cells, which line the inner surface of ovarian follicles, the temporary, sphere-like structures which ultimately break open and give rise to the egg each month.

In women with PCOS, the follicles fail to mature normally.  Instead of rupturing during the monthly cycle to release the egg, the follicles accumulate and form numerous cyst-like structures.  Previous studies have shown that in PCOS, theca cells are the source of the high levels of androgens found in women with the condition.

PCOS appears to run in families, but no genes have been definitively linked to the disorder.  Researchers believe that PCOS probably results from the interaction of several genes, and perhaps to interactions between certain genes and the environment.

Previously, researchers conducting genome-wide scans (searches of all of a person’s genes) of women in China identified several candidate genes in locations on chromosomes that were associated with the disease.  One of these locations harbored the gene for DENND1A.  Researchers conducting genome-wide scans of people of Asian and European descent also confirmed the gene’s association with PCOS.

The researchers next conducted a battery of experiments on the cells to determine what role DENND1A.V2 might play in PCOS.  They began by manipulating the theca cells from women who did not have PCOS to produce high levels of DENND1A.V2. The theca cells, which previously functioned normally, began producing elevated levels of androgens.  Similarly, when the researchers blocked the function of DENND1A.V2 in theca cells from women with PCOS, androgen levels in those cells dropped sharply, as did to the activity of other genes that make androgen and the levels of messenger RNA needed to produce androgens. The study authors noted that DENND1A.V2 is also found in other cells that make androgens, including cells in the testes, as well as in a type of cancer cell occurring in the adrenal glands.

The cells from women with PCOS also contained higher levels of the messenger RNA for DENND1A.V2.  Messenger RNA converts the information contained within DNA into a protein.

“PCOS is often difficult to diagnose, especially in adolescents,” Dr. McAllister said.  “The fact that DENND1A.V2 is present in urine opens up the possibility that it might provide the basis for a test to screen for PCOS.”