Children with Cushing syndrome may have higher suicide risk 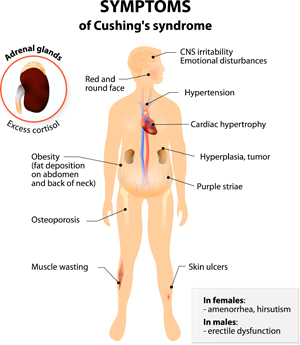 Children with Cushing syndrome may be at higher risk for suicide as well as for depression, anxiety and other mental health conditions long after their disease has been successfully treated, according to a study by researchers at the National Institutes of Health.

Cushing syndrome results from high levels of the hormone cortisol. Long-term complications of the syndrome include obesity, diabetes, bone fractures, high blood pressure, kidney stones and serious infections. Cushing’s syndrome may be caused by tumors of the adrenal glands or other parts of the body that produce excess cortisol. It also may be caused by a pituitary tumor that stimulates the adrenal glands to produce high cortisol levels. Treatment usually involves stopping excess cortisol production by removing the tumor.

“Our results indicate that physicians who care for young people with Cushing syndrome should screen their patients for depression-related mental illness after the underlying disease has been successfully treated,” said the study’s senior author, Constantine Stratakis, D(med)Sci, director of the Division of Intramural Research at NIH’s Eunice Kennedy Shriver National Institute of Child Health and Human Development.  “Patients may not tell their doctors that they’re feeling depressed, so it’s a good idea for physicians to screen their patients proactively for depression and related conditions.”

Cushing syndrome may affect both adults and children. A recent study estimated that in the United States, there are 8 cases of Cushing syndrome per 1 million people per year.

The researchers published their findings in the journal Pediatrics. They reviewed the case histories of all children and youth treated for Cushing syndrome at NIH from 2003 to 2014, a total of 149 patients. The researchers found that, months after treatment, 9 children (roughly 6 percent) had thoughts of suicide and experienced outbursts of anger and rage, depression, irritability and anxiety. Of these, 7 experienced symptoms within 7 months of their treatment.

Two others began experiencing symptoms at least 48 months after treatment.

The authors noted that children with Cushing syndrome often develop compulsive behaviors and tend to become over-achievers in school. After treatment, however, they then become depressed and anxious. This is in direct contrast to adults with Cushing syndrome, who tend to become depressed and anxious before treatment and gradually overcome these symptoms after treatment.

The authors stated that health care providers might try to prepare children with Cushing syndrome before they undergo treatment, letting them know that their mood may change after surgery and may not improve for months or years. Similarly, providers should consider screening their patients periodically for suicide risk in the years following their treatment.