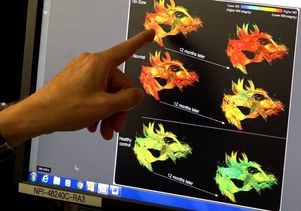 A technique that monitors the brain’s electrical activity could one day be used to predict which children who have had a traumatic brain injury (TBI) are likely to suffer progressive brain damage, according to a small study funded in part by the Eunice Kennedy Shriver National Institute of Child Health and Human Development (NICHD), a component of the National Institutes of Health.

If more research shows that the technique is effective, researchers would be able to use it to devise new treatments to prevent the progressive decline that occurs in the aftermath of a brain injury. The study, published in the journal Neurology, was conducted by Emily L. Dennis, Ph.D, of the University of Southern California in Marina Del Ray, and colleagues.

TBI may result when the head hits an object or when an object pierces the skull and brain tissue. TBI can be mild, moderate, or severe, depending on the extent of damage to the brain. It is very difficult to predict how a child will fare long-term after a TBI, making it difficult to plan treatment. Brain-injured children tend to follow one of two trajectories—either a steady recovery toward normal functioning or a progressive decline leading to problems with attention, learning, or depression.

The authors noted that, in some patients, brain injury is followed by damage to the brain’s white matter, which is largely made up of nerve fibers coated with myelin. Like the insulating sheath that covers household electrical wires, myelin coats individual nerve fibers, allowing them to conduct electrical impulses efficiently. The authors wrote that, after TBI, a decline in function often accompanies a loss of the myelin insulation, which undermines brain function.

The current study enrolled 21 children ages 8 to 18 from 4 Los Angeles-area hospitals. The children had been injured after falls from skateboards, scooters, and bicycles; in car crashes; and from being hit by cars as pedestrians. All underwent magnetic resonance imaging (MRI) scans and several cognitive tests about 2 to 5 months after their injury and then about a year later.

Researchers monitored the children’s interhemispheric transfer time (IHTT)—the time it takes for nerve impulses to travel across brain halves, or hemispheres—during a task that involved matching patterns on a screen. They compared their IHTT scores with images of the corpus callosum, the band of white matter that relays these nerve impulses across the hemispheres. The researchers used an imaging technique called diffusion-weighted MRI to produce three-dimensional images of the corpus callosum.

At the follow-up scan and testing performed a year later, the children with slow IHTT scores were more likely to experience declines in thinking ability and memory skills. Imaging also showed that these children had experienced progressive damage to their white matter.

By linking slow IHTT times with progressive damage to white matter, the study provides insight into why some children fail to recover from TBI.

Some researchers believe that a prolonged inflammatory response could underlie extensive white matter damage like that seen in the study. If the study results are confirmed, researchers could then test drugs that halt inflammation as a potential means to prevent this damage from occurring.