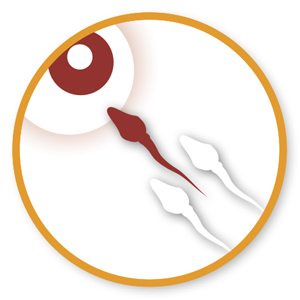 Researchers funded by the National Institutes of Health have discovered the cellular switch that boosts the activity of sperm cells so that they can travel to the egg.  The finding may lead to new options for male contraception as well as treatments for infertility resulting from problems with sperm mobility.

Publishing online in Science, the researchers report that the molecule to which progesterone must bind is the enzyme alpha/beta hydrolase domain containing protein 2 (ABHD2), found in the sperm cell’s outer membrane. The study was conducted by Melissa R. Miller and colleagues at the University of California, Berkley, the University of California, San Francisco, and Yale University School of Medicine in New Haven, Connecticut.

“This is an important advance in explaining how sperm become hypermotile in the female reproductive tract,” said Stuart Moss, Ph.D, director of the male reproductive health program at NIH’s Eunice Kennedy Shriver National Institute of Child Health and Human Development, which funded the study.

Similarly, strategies to bypass or enhance the enzyme might provide therapies for treating infertility resulting from sperm that lack movement capability.

Before a sperm can transition to the hyper-active phase, calcium must pass through the cell’s outer membrane and enter the flagella, the tail-like appendage the cell uses to propel itself.  The sperm protein known as CatSper joins with similar proteins in the flagella to allow the entry of calcium.

When the researchers undertook the current study, it was not known whether progesterone interacted directly with CatSper to trigger the calcium influx, or acted on some other molecule (which, in turn, acted on CatSper). Before treating sperm with progesterone, the researchers exposed them to a chemical that inhibits a particular class of enzymes that they believed could include the candidate molecule that acted on CatSper. The hunch proved correct: the treated cells remained inactive after progesterone exposure, indicating that CatSper was not directly involved.