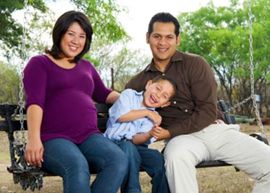 Ms. Christine Guilfoy: A little parent training can go a long, long way.  Parents who took part in a program to learn parenting skills during their first pregnancy had children who were better adjusted than parents who didn’t participate in the program.  That’s what researchers concluded after evaluating the program 5 to 7 years later.

The researchers developed the program, called Family Foundations, about 10 years ago with NICHD funding.  Family Foundations offered a series of classes for expectant first-time parents to help them prepare for a new baby.  During the pregnancy and after the birth, parents were taught how to work together as a team, how to communicate with each other to resolve their conflicts, and how to solve problems together.  For the current analysis, the researchers also received funding from the National Institute of Mental Health.

The children who took part in the program were less likely to show signs of what researchers describe as internalizing behaviors, for example, withdrawing from social situations, not interacting with others, feeling anxious or depressed, or changes in sleeping or eating patterns.  In addition, boys whose parents had the training were less likely to engage in externalizing behaviors, that is, vandalism, disregarding rules, threatening others, or physical violence.

The study was led by Mark Feinberg

, a professor in the College of Health and Human Development at Pennsylvania State University.

Thanks for joining us, Dr. Feinberg.

Dr. Mark Feinberg: Thank you for having me.

Dr. Feinberg: I think you described them well a moment ago.  Co-parenting has to do with the ways that parents support each other and coordinate with each other around the parenting and rearing of their children.  And this can be biological parents, an adoptive parent, step-parent; it could be a parent with another family member or friend, perhaps a grandmother who’s playing a parental role.  And the important thing is that the co-parenting relationship has to do with parenting per se and not other aspects of a couple’s relationship, such as their financial life or their sexual life or their friendship with each other, but really focuses on how they work together, how they coordinate, plan, support each other, whether they undermine each other.

We find that co-parenting is important because it influences not only the ways that parents feel about themselves as parents and influences their level of stress and depression, but it also actually influences how sensitive and responsive they are, whether they are over-reactive and impatient and harsh with their children and in that way also influences how the children themselves turn out over long periods of time.

Ms. Guilfoy: And can you tell us more about what you found?  How did the kids whose parents had the training differ from those whose parents didn’t?

Dr. Feinberg: Sure.  Well, we found three main ways that the kids differed.  For those kids whose parents were randomly assigned to the Family Foundations' classes, the teachers, 7 years later, reported that those children showed fewer depressive and anxious behaviors and symptoms, and the boys also showed fewer disruptive behaviors, what we call externalizing behavior problems.

And then, when we narrowed the lens and just looked at those families who showed some level of risk before birth, because the couples were arguing or hostile with each other, when we narrowed the lens to focus on those families, we found that the children exposed to Family Foundations were, by teacher report, showing better engagement in learning, better performance, better adjustment with peers and teachers at school.

Ms. Guilfoy: Interesting.  And so, why is it important for parents to begin the training before the child is born?

Dr. Feinberg: Well, it’s always easier to teach people something before they’ve entered a new situation rather than give them a chance to develop perhaps some bad habits and then try to train them out of those habits.  So with co-parenting, there is obviously not a co-parenting relationship before the first child is born and afterwards, when parents are stressed, they’re not sleeping very well; they may be irritable.  Many women, and fathers, also, experience the baby blues and postpartum depression.  At that point, it can be hard to develop a positive, cooperative co-parenting relationship, and some couples struggle with that, and that struggle continues then for years.  And we find when we introduce parents or expectant parents to ideas about how to support each other and how to cooperate with each other in a positive way before birth, then they’re able to take that on and implement those ideas when the baby is born.

Ms. Guilfoy: And what’s the takeaway message for parents from this research?

Dr. Feinberg: I think there are two takeaway messages from this research.  The first message is for parents, and even though most parents are excited and happy to be entering this phase of life, it can also be stressful and difficult.  And the message for parents is that there are ways to prepare as individuals and as couples to foster a strong relationship with one’s partner and there—and by doing that, to become more sensitive and responsive to one’s child, even during the difficult times when one is tired and sleepy and irritable.

The second message, I think, is for the rest of the field of researchers and policymakers.  In the last few years, we’ve seen a growth in the implementation of programs preparing high-risk mothers and some families for birth.  And those programs, mostly home-visiting programs, have had good effects in helping high-risk families improve their adjustment and transition to parenthood.  And what this research shows is that we’re able to demonstrate very positive effects for children and for families over a long period of time when we focus not just on high-risk families but on all families because the transition to parenthood is tricky and can be difficult for all families.

Ms. Guilfoy: Very good.  Well, thank you so much for joining us and telling us about this research.

Dr. Feinberg: Thank you for having me.