Two surgical treatments for a form of pelvic hernia affecting women have similar rates of success and safety, scientists in a National Institutes of Health research network have found. A guided exercise therapy to strengthen pelvic muscles did not add to the benefits of either surgery.

The surgical procedures and exercise therapy are used to treat pelvic organ prolapse, an often uncomfortable and sometimes painful weakening of the pelvic organs that may affect women in the years after childbirth.  Previous network research suggests that about 3 percent of U.S. women will have symptoms of prolapse in a given year, and that the condition is especially common in older women and women who have given birth several times. 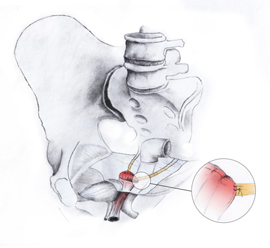 Normally, a sling of muscle and tissue spans the bottom of the pelvic cavity, holding the bladder, uterus, and other organs in place.  In pelvic organ prolapse, this sling weakens, and the internal organs slump downward, pressing on the vagina and anus.  In some cases, the pressure causes the vagina to invert and protrude through the vaginal opening.  Symptoms may also include urinary or fecal incontinence and pelvic pain.

According to the study authors, every year, about 300,000 U.S. women undergo surgery for prolapse.  In two of the most common surgeries for the condition, surgeons stitch the top of the vagina to ligaments inside the pelvic cavity.  One procedure, uterosacral ligament suspension, involves stitching the vagina to the uterosacral ligaments, which normally connect the lower part of the womb to the tailbone.  The other procedure, sacrospinous ligament fixation, involves stitching the top of the vagina to one of two sacrospinous ligaments, which link the lower tailbone to the pelvis.

Many women who undergo surgery for pelvic organ prolapse also receive one-on-one sessions with a specialized physical therapist or nurse who coaches them on exercises for the pelvic floor.  Similar to Kegels, these exercises are meant to strengthen the pelvic floor muscles. 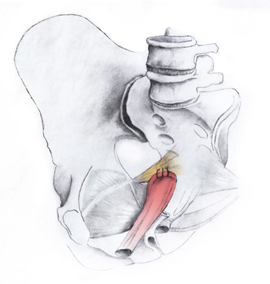 "This is the largest, most comprehensive study of its kind to compare these two surgical procedures and examine the potential for added benefit from pelvic floor muscle training," said study author Susan Meikle, M.D., project scientist for the Pelvic Floor Disorders Network of the Eunice Kennedy Shriver National Institute of Child Health and Human Development (NICHD).  "The results provide sound information that patients and their physicians can use to plan the most appropriate treatment."

The study appears in the current issue of the Journal of the American Medical Association.   Matthew D. Barber, M.D., of the Cleveland Clinic in Ohio, led the study.  Other authors were from institutions participating in the NICHD's Pelvic Floor Disorders Network.  In addition to support from NICHD, the NIH Office of Research on Women's Health also provided funding.

Of the 374 women with vaginal prolapse and urinary incontinence who took part in the study, 188 were assigned randomly to undergo uterosacral ligament suspension, and 186 were randomized to receive sacrospinous ligament fixation.  Almost all of the women also received additional pelvic procedures at the time of surgery, such as a hysterectomy or the placement of a sling to hold up the urethra, depending on their symptoms.  The women also received standard instructions before their surgery, such as to avoid lifting heavy objects, to eat a high-fiber diet to reduce the chances of constipation, and to refrain from sexual intercourse. In addition, 186 of the women receiving either of the two surgical treatments were further randomized to a guided exercise course to strengthen the pelvic muscles or to usual care (self-care instructions from the surgeon but no exercise course).  The exercise course consisted of one pre-surgical session and four sessions in the 12 weeks after the surgery. These participants were coached on muscle-contraction exercises that targeted their weakest pelvic floor muscles.

After two years, the researchers evaluated the success of the surgical procedures and exercise course.  The researchers judged success according to a scoring system that accounted for physician observations during a gynecological examination and the women's responses to questions about their symptoms.  The scoring system took into account the extent to which the top of the vagina protruded into the vaginal canal, the need for follow-up surgery to treat the prolapse or urinary incontinence, and the women's experience of painful or bothersome sensations in the pelvic area.

After two years, there was no statistically significant difference in the success rates of the two types of surgery.  Of the women undergoing uterosacral ligament suspension, 59.2 percent received a score indicating success.  For women undergoing sacrospinous ligament fixation, 60.5 percent received a score in the successful range.  According to the study authors, compared to previous studies of these surgeries, these reported rates of success are relatively low.  However, this study used stricter criteria for defining success than other studies have. In fact, only about 5 percent of all women in this study received follow-up prolapse surgery or a vaginal-support device in the two years after their surgery.

In both surgical groups, the women experienced similarly low rates of serious adverse outcomes, with less than 5 percent having a serious adverse event directly related to the procedure.

The guided exercise program did not seem to offer additional benefit to most of the participants.  Within both surgical groups, scores on measures of incontinence, prolapse and discomfort did not vary significantly between women in the exercise program and those who received usual care only.  These results suggest that this supplemental exercise therapy may not be justified as routine care for all women who receive these two surgeries, the study authors wrote.

"It's helpful that we now know that, on the whole, these surgical techniques are very similar in the advantages they offer patients," Dr. Barber said.  "Physicians skilled in both techniques can now tailor their surgical recommendations to each patient's individual case."

About the NIH Office of Research on Women's Health (ORWH): The ORWH promotes women's health and sex differences research within and beyond the NIH and works to ensure that women and minorities are included in NIH clinical research. ORWH establishes the NIH research agenda for women's health, co-funds research in partnership with NIH Institutes and Centers, and supports women in biomedical careers and women's health researchers. For more information about NIH's Office of Research on Women's Health, visit http://orwh.od.nih.gov.