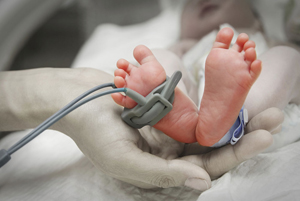 Extreme hot or cold temperatures during pregnancy may increase the risk that infants born at term will be of low birth weight, according to a study of U.S. women by researchers at the National Institutes of Health. The study was published in Environmental Research.

“Until we can learn more, it makes sense to reduce the amount of time that pregnant women are exposed to extreme hot or cold weather,” said the study’s senior author, Pauline Mendola, Ph.D., an epidemiologist in the Division of Intramural and Population Health Research at NIH’s Eunice Kennedy Shriver National Institute of Child Health and Human Development (NICHD).

In the current study, NICHD researchers linked medical records from 223,375 births at 12 U.S. clinical centers to hourly temperature records for the region surrounding each center. They defined extreme cold as below the 10th percentile of average temperatures for a region; extreme heat was above the 90th percentile.

Researchers do not know why exposure to atypically high or low temperatures would affect birth weight. The authors noted that previous studies have suggested that heat exposure could affect birth weight by increasing oxidative stress—toxic byproducts formed when oxygen interacts with cells and tissues—and by increasing inflammation. It is also possible that temperature extremes could reduce blood flow to the uterus, depriving the infant of oxygen and nutrients and hindering the placenta’s ability to remove fetal wastes.

The study adds to the researchers’ 2016 analysis of the same data in which they reported that extreme heat and cold may increase the risk of preterm birth.