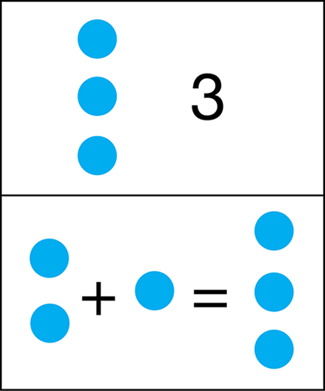 Number system knowledge is the ability to relate a quantity to the numerical symbol that represents it, and to manipulate quantities and make calculations. For example, the 3dots shown can be represented by the numeral three and that 3 is made up of 2 and 1.

Children who failed to acquire a basic math skill in first grade scored far behind their peers by seventh grade on a test of the mathematical abilities needed to function in adult life, according to researchers supported by the National Institutes of Health.

The basic math skill, number system knowledge, is the ability to relate a quantity to the numerical symbol that represents it, and to manipulate quantities and make calculations. This skill is the basis for all other mathematics abilities, including those necessary for functioning as an adult member of society, a concept called numeracy.

The researchers reported that early efforts to help children overcome difficulty in acquiring number system knowledge could have significant long-term benefits. They noted that more than 20 percent of U.S. adults do not have the eighth grade math skills needed to function in the workplace.

“An early grasp of quantities and numbers appears to be the foundation on which we build more complex understandings of numbers and calculations,” said Kathy Mann Koepke, Ph.D., director of the Mathematics and Science Cognition and Learning: Development and Disorders Program at the Eunice Kennedy Shriver National Institute of Child Health and Human Development (NICHD), the NIH institute that sponsored the research. “Given the national priority on education in science, technology, engineering and math fields, it is crucial for us to understand how children become adept at math and what interventions can help those who struggle to build these skills.” 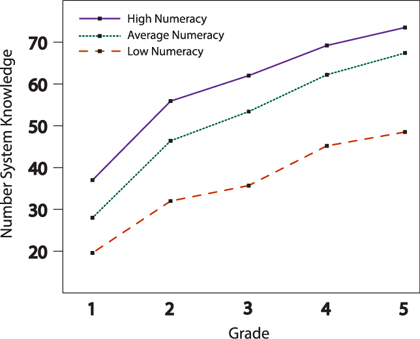 A low score on the assessment of number system knowledge in first grade significantly increased a student’s risk of getting a low functional numeracy score as a teenager. Starting with poor number knowledge can put children so far behind that they never catch up, the researchers reported.

The researchers found that by seventh grade, children who had the lowest scores on an assessment of number system knowledge in first grade lagged behind their peers. They noted that these differences in numeracy between the two groups were not related to intelligence, language skills or the method students used to make their computations.

For the testing at age 13, 180 of the students took timed assessments that included multiple-digit addition, subtraction, multiplication, and division problems; word problems; and comparisons and computations with fractions. Previous studies have shown that these tests evaluate functional numeracy―skills that adults need to join and succeed in the workplace. This might include the limited understanding of algebra needed to make change such as being able to provide an answer to a question such as: “If an item costs $1.40 and you give the clerk $2, how many quarters and how many dimes should you get back?” Other aspects of functional numeracy include the ability to manipulate fractions, as when doubling the ingredients in a recipe (for example, adding 1 ½ cups water when doubling a recipe that calls for ¾ cups water) or finding the center of a wall when wanting to center a painting or a shelf.

The researchers’ analysis showed that a low score on the assessment of number system knowledge in first grade significantly increased a student’s risk of getting a low functional numeracy score as a teenager.

The researchers examined learning and found that first graders with the lowest scores also had the slowest growth in number system knowledge throughout that school year. Starting with poor number knowledge can put children so far behind that they never catch up, the researchers said.

“These findings are especially valuable for bringing attention to the idea that numeracy early in life has profound effects not only for the individual, but also for the society that individual works and lives in,” Dr. Mann Koepke said.