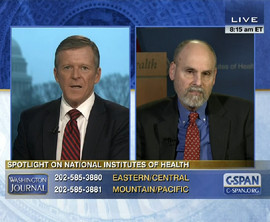 Recently, NICHD Director Alan E. Guttmacher, M.D., appeared on C-SPAN’s “Washington Journal,” along with 3 other NIH Institute Directors. Dr. Guttmacher and his colleagues and provided background on their respective Institutes, reported on new research findings, and took calls from viewers.

Appearing first with host Steve Scully was Story Landis, Ph.D., Director of the National Institute of Neurological Disorders and Stroke. Dr. Landis explained that neurological disorders are those that affect the brain or spinal cord, such as stroke, Parkinson’s disease, and epilepsy. Although stroke is the fourth leading cause of death in the United States, Dr. Landis said stroke rates have decreased and available treatments for stroke sufferers have improved.

Dr. Guttmacher discussed the Institute’s long history of research on premature birth. He said that treatment for premature babies has greatly improved, and that although U.S. rates of preterm births have dropped, the level is still a significant problem. He described other NICHD research areas, ranging from investigating the rise of childhood obesity to better understanding developmental disabilities.

Dr. Gary Gibbons, Director of the National Heart, Lung, and Blood Institute, explained that heart disease is the number one cause of death for both men and women. Moreover, he added, as a chronic disease, heart disease contributes to ongoing disability for individuals, making this condition is an important target for biomedical research.

About the Eunice Kennedy Shriver National Institute of Child Health and Human Development (NICHD): The NICHD sponsors research on development, before and after birth; maternal, child, and family health; reproductive biology and population issues; and medical rehabilitation. For more information, visit the Institute's Web site at http://www.nichd.nih.gov/.