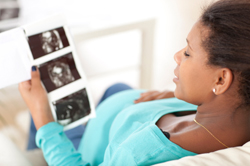 A daily low dose of aspirin may help a subgroup of women who have previously lost a pregnancy to successfully conceive and carry a pregnancy to term, according to an analysis by researchers at the National Institutes of Health. The women who benefited from the aspirin treatment had high levels of C-reactive protein (CRP), a substance in the blood indicating system-wide inflammation, which aspirin is thought to counteract. The study appears in the Journal of Clinical Endocrinology and Metabolism.

Researchers at NIH's Eunice Kennedy Shriver National Institute of Child Health and Human Development (NICHD) analyzed data originally obtained from the Effects of Aspirin in Gestation and Reproduction (EAGeR) trial. The trial sought to determine if daily low-dose aspirin could prevent subsequent pregnancy loss among women who had one or two prior losses.

For the current study, researchers classified the women into 3 groups: low CRP (below .70 mg per liter of blood), mid CRP (from .70 to 1.95) and high CRP (at or above 1.95). Women within each group received either daily low-dose aspirin or a placebo. In their analysis, researchers found no significant differences in birth rates between those receiving aspirin and those receiving placebo in both the low CRP and mid CRP groups. For the high CRP group, those taking the placebo had the lowest rate of live birth at 44 percent, while those taking daily aspirin had a live-birth rate of 59 percent—a 35-percent increase. Aspirin also appeared to reduce CRP levels in the high CRP group when measured during weeks 8, 20, and 36 of pregnancy.

The authors concluded that more research is needed to confirm the findings and to examine the potential influence of inflammation in becoming pregnant and maintaining pregnancy.

Lindsey A. Sjaarda, Ph.D., staff scientist in the NICHD Division of Intramural and Population Health Research, is available for interviews.