Researchers at the National Institutes of Health and the University of Hong Kong have discovered that high levels of a particular protein in cancer cells are a reliable indicator that a cancer will spread. 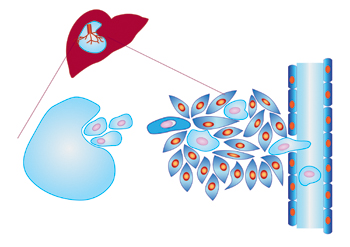 In the process of metastasis, as with the liver tumor shown above and in the inset at left, cells break away from tumor tissue and pass through surrounding tissue into lymph or blood vessels (inset, center and right). These cancer cells then travel through the body and form tumors elsewhere.

The findings raise the long term possibilities of new tests to gauge the likelihood that a cancer will spread and, ultimately, of a treatment that could prevent cancer from spreading.

The protein, known as CPE-delta N, is a form of carboxypeptidase E (CPE). Ordinarily, CPE is involved in processing insulin and other hormones. CPE-delta N, a variant of CPE, was present in high amounts in tumors that had spread and, to a much lesser degree, in surrounding tissues.

Cancer cells can break away from a primary tumor and spread, or metastasize, to other parts of the body, where they form new tumors. Metastatic cancer is often fatal, and health care practitioners seek to contain cancer early, before it can metastasize.

"Testing for CPE-delta N, if combined with existing diagnostic methods, offers the possibility of more accurately estimating the chances that a cancer will spread," said Alan E. Guttmacher, M.D., director of the Eunice Kennedy Shriver National Institute of Child Health and Human Development, which supported the study. "Conceivably, a patient's CPE-delta N levels could be a key guide in individualizing their cancer care to improve outcome." 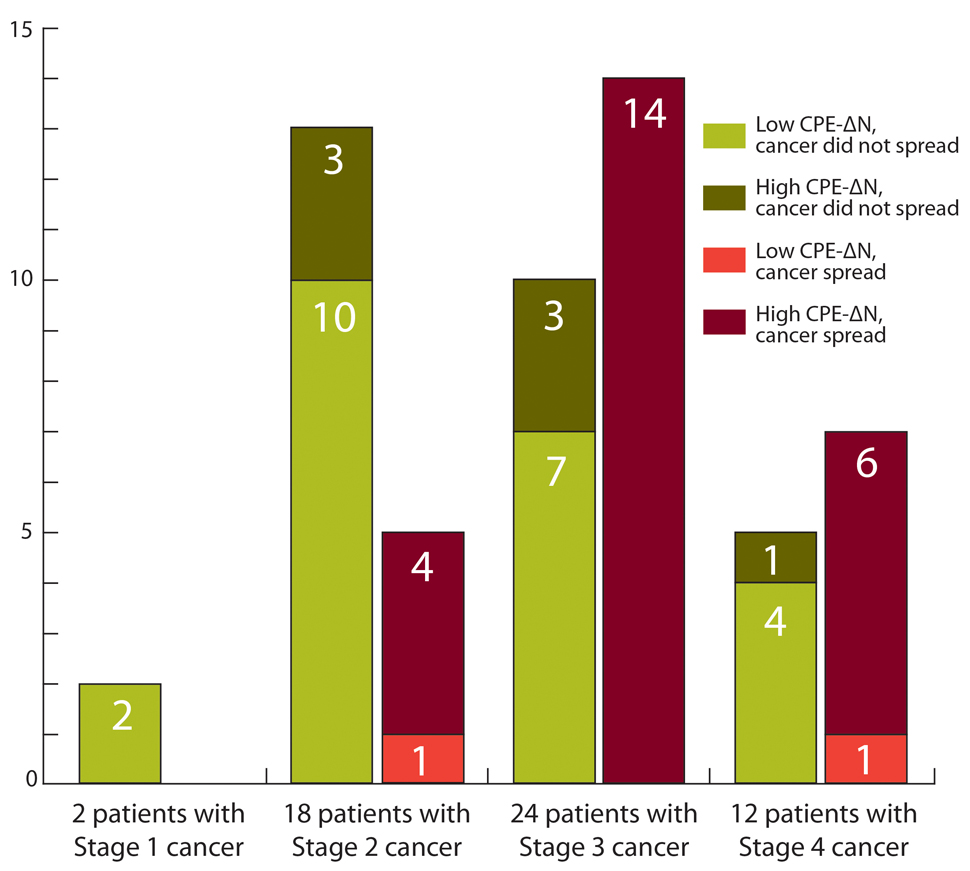 The researchers examined when cancer spread (red bars) and when it did not (green bars) for each stage of the disease.  Darker colors represent higher levels of CPE-delta N RNA in tumor tissue.  At each stage, cancer in tumors with high levels of CPE-delta N RNA (more than twice levels in surrounding tissue) was more likely to spread to other parts of the body.
A high contrast, black and white version of this chart is available at http://www.nichd.nih.gov/news/releases/PublishingImages/
020111_Metastasis_Tumor_Bar_Graph_bw.jpg (JPG - 248 KB)

Tests indicating high levels of the protein predicted the spread of a cancerous tumor even when conventional staging—diagnostic techniques to gauge the extent and seriousness of a cancer—indicated that spread was unlikely. The finding raises the possibility that testing for CPE-delta N might be used in combination with conventional staging to further refine treatment. For example, if conventional staging indicated that a cancer was unlikely to spread, but a patient's tumor had high CPE-delta N levels, that patient might be referred for more intensive therapies normally reserved for higher stage cancers.

The findings appear in the Journal of Clinical Investigation.

The researchers tested for CPE-delta N indirectly, by measuring levels of a molecule that assists in manufacturing the protein. RNA (ribonucleic acid) works with the information in a gene to make a particular protein—in this case, CPE-delta N.

In an analysis of tissue from 99 patients with liver cancer, the researchers compared the amount of CPE-delta N RNA from the patients' tumors with the RNA levels in surrounding tissue.

The researchers found that when the level of CPE delta-N RNA in tumors was more than twice that in the surrounding tissue, the cancer was highly likely to return or to metastasize within two years. At or below this threshold level, the cancer was much less likely to recur. Using this threshold measure, the researchers accurately predicted metastasis or recurrence in more than 90 percent of cases. Conversely, their predictions that tumors would not return in the two-year period were accurate 76 percent of the time.

Next, the researchers measured CPE-delta N RNA levels from stored tumor tissue originally removed from 14 patients with pheochromocytoma, a rare tumor of the adrenal glands, and paraganglioma, a rare tumor primarily occurring in the adrenals but sometimes in other parts of the body. Because the adrenal glands are very small, tissue surrounding the tumor was not obtainable, so the researchers measured the amount of CPE-delta N RNA in the tumor tissue only. The number of copies ranged from 150,000 to 15 million per 200 micrograms of tissue. In all of the cases where cancer was found to have recurred or metastasized, CPE-delta N RNA levels were greater than 1 million. The researchers found no metastasis or recurrence in cases in which tumors had less than 250,000 copies. Patients' status was tracked for up to eight years.

In addition, the researchers examined cells from liver, breast, colon, and head and neck, tumors and found that those known to spread most aggressively had the highest levels of CPE-delta N RNA.

The researchers next tested a potential strategy for preventing the spread of cancer by halting the production of CPE-delta N in two different mouse models. The strategy involved treating metastatic tumors with antisense RNA, which binds to RNA, preventing it from making a protein.

In the first experimental model, the researchers transplanted highly metastatic liver cancer cells beneath the skin of mice. Half the transplants were first treated with antisense RNA specific for CPE-delta N, the other half were not. After 30 days, the tumors in the mice not treated with antisense RNA for CPE-delta N were much larger than the treated tumors in the remaining mice. Next, the researchers removed the tumors from the first set of mice and transplanted them into the livers of a second group of mice. After 35 days, only the untreated tumors had spread and formed new tumors.

Dr. Loh explained that the method used in the study might some day be used to treat cancers in human beings. Currently, there are no means to deliver the antisense RNA to tumor cells. A potential approach might involve modifying a virus to carry the antisense RNA into cells.

Similarly, further research might lead to the development of drugs or other measures to block CPE-delta N and so prevent cancer from spreading.

A transcript of the media availability briefing of "Level of Tumor Protein Indicates Chances Cancer Will Spread" is also available.

The NICHD sponsors research on development, before and after birth; maternal, child, and family health; reproductive biology and population issues; and medical rehabilitation.  For more information, visit the Institute's Web site at http://www.nichd.nih.gov/ .

The National Institutes of Health (NIH) — The Nation's Medical Research Agency — includes 27 Institutes and Centers and is a component of the U. S. Department of Health and Human Services.  It is the primary federal agency for conducting and supporting basic, clinical, and translational medical research, and it investigates the causes, treatments, and cures for both common and rare diseases.  For more information about NIH and its programs, visit http://www.nih.gov .