Classroom aids enhance study of learning and the brain

An NIH researcher has captured video images of a previously unknown form of communication between brain cells that might hold clues to the way learning shapes the brain.

The videos, offered as a resource for educators teaching high school, undergraduate and graduate students, are available on the Web from Science Signaling. 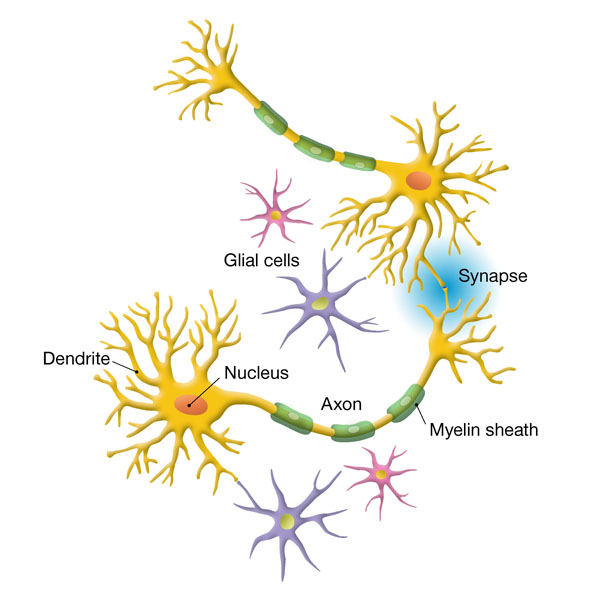 In the nervous system, networks of nerve cells send signals throughout the body. Signals that cross the synapse from one cell to another have been thought to be the main form of communication, but new research shows neurons emit signals from the axon as well.

These newly recorded signals are emitted along the length of nerve fibers. Earlier research has documented the transmission of signals across the synapse—a gap between individual nerve cells, known as neurons. The new videos show that when neurons communicate, electrical signals emitted along the length of neurons stimulates nearby brain cells known as glia, or glial cells. As a result, the glial cells begin making a substance called myelin, which coats the nerve fibers and allows electrical charges to travel with greater speed through the brain’s networks.

Other studies have shown that the process of myelination underlies learning and is crucial for the development of new skills.

Additional research might help clarify how signaling between neurons and glial cells triggers myelination and influences skill development, according to R. Douglas Fields, Ph.D., of the Nervous Systems Development and Plasticity Section of the Eunice Kennedy Shriver National Institute of Child Health and Human Development (NICHD).

"For the last 100 years researchers have studied how information traverses the brain, crossing synapses and traveling from one nerve cell to the next," said Dr. Fields. "We can now see another type of communication, in which cells along a neuron’s length can sense the chemical signals the neuron releases."

To detect these signals, Dr. Fields observed neurons under a microscope. Nerve fibers, or axons, are long projections that stretch between neurons. The longest human axon stretches from the base of the spine to the big toe. Working with the corresponding neuron of mice, Dr. Fields stimulated the neuron with electrical charges and recorded his findings in three videos now available on the Science Signaling website: http://stke.sciencemag.org/cgi/content/full/sigtrans;4/155/tr1

Originally, glial cells were thought to serve only as a kind of glue, holding neurons in place while the neurons conducted the brain’s important business of communication. For years, Dr. Fields observed neurons under a microscope, exposing them to a dye that glowed in the presence of calcium. After the neurons had been stimulated, they would give off a flash of light, the tell-tale indicator that they transmitted an impulse, releasing calcium in the process.

One day, on a hunch, he put glial cells next to some neurons, added the dye, and repeated the process. To his surprise, the glial cells lit up along with the neurons. Apparently, the calcium had passed from the neuron into the glial cell, an indication that the two cell types had communicated, using calcium as a signal. The observation led to years of research, culminating in the work described in the Science Signaling article.

"It’s humbling, really," Dr. Fields said. "We had taken glial cells for granted for so many years and we’ve since come to see that they’re not just supporters of neurons, but integral partners that enable learning and the acquisition of new skills to take place."

The NICHD sponsors research on development, before and after birth; maternal, child, and family health; reproductive biology and population issues; and medical rehabilitation.  For more information, visit the Institute’s Web site at http://www.nichd.nih.gov/ .

The National Institutes of Health (NIH) — The Nation's Medical Research Agency — includes 27 Institutes and Centers and is a component of the U. S. Department of Health and Human Services.  It is the primary federal agency for conducting and supporting basic, clinical, and translational medical research, and it investigates the causes, treatments, and cures for both common and rare diseases.  For more information about NIH and its programs, visit http://www.nih.gov .