Pre-pregnancy potato consumption may be linked to gestational diabetes risk 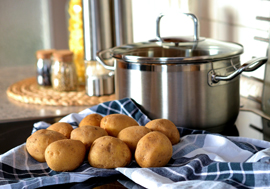 Women who eat more potatoes before pregnancy may have higher rates of gestational diabetes—the form that occurs during pregnancy—compared to women who consume fewer potatoes, suggests a National Institutes of Health (NIH) study. The researchers propose that substituting potatoes with other vegetables, legumes or whole grains may help lower gestational diabetes risk. The findings appear in The BMJ (formerly the British Medical Journal).

Gestational diabetes is a common pregnancy complication that causes high blood sugar levels in the mother. The disorder can lead to future health problems for mother and child. Previous studies have linked foods with a high glycemic index, a measure of the ability to raise blood sugar levels, to a higher risk of gestational or type 2 diabetes. However, until the current study, the effect of potatoes, a common, high-glycemic food, on the development of gestational diabetes was unknown.

Researchers from NIH’s Eunice Kennedy Shriver National Institute of Child Health and Human Development (NICHD) and Harvard University evaluated more than 15,000 women in the Nurses’ Health Study II. They analyzed records from 1991 to 2001 of women who had no history of illness before pregnancy and had not had gestational diabetes before. Every four years, the women filled out a questionnaire on the kinds of foods they had eaten during the previous year. For potatoes, the women were asked if they had consumed baked, boiled, or mashed potatoes, fries or potato chips, with possible responses ranging from “never” to “six or more times a day.”

The authors cautioned, however, that because their study was not designed to prove cause and effect, their results do not prove conclusively that potato consumption directly leads to gestational diabetes. They added that their results need to be confirmed by other studies.