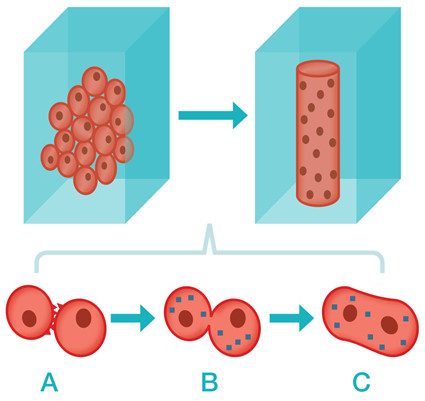 To form muscle fibers, masses of cells merge to form long tubes with many cell nuclei (above). Recent research reveals two distinct stages in this process. First, proteins on the outside of the cells (shown as spikes in A) promote the fusion of the cell membranes. The blue squares in B and C represent proteins inside the cells that facilitate the development of a pore between them, so their contents can merge. This process of cell fusion is a basic part of the biology of muscle cell fusion and of several other types of cells as well.

Researchers at the National Institutes of Health have identified proteins that allow muscle cells in mice to form from the fusion of the early stage cells that give rise to the muscle cells.

The findings have implications for understanding how to repair and rehabilitate muscle tissue and to understanding other processes involving cell fusion, such as when a sperm fertilizes an egg, when viruses infect cells, or when specialized cells called osteoclasts dissolve and assimilate bone tissue in order to  repair and maintain bones.

Their findings were published online in the Journal of Cell Biology.

“Through a process that starts with these progenitor cells, the body forms tissue that accounts for about one-third of its total weight,” said the study’s senior author, Leonid V. Chernomordik, Ph.D., of the Section on Membrane Biology at the Eunice Kennedy Shriver National Institute of Child Health and Human Development (NICHD), the NIH institute where the research was conducted.  “Our study provides the first look at the very early stages of this fusion process.”

Muscle cells originate from precursor cells known as myoblasts.  Myoblasts fuse to form a single long tubular cell called a myocyte (a muscle fiber).  Muscle tissue is composed of large collections of these fibers.  The fusion of myoblasts into muscle fibers takes place early in fetal development.  With exercise and throughout a person’s life, the process is repeated to form new muscle mass and repair old or damaged muscle.

The researchers identified the two distinct stages of cell fusion and the essential proteins that facilitate these stages.

In the first stage, two myoblasts meet, and proteins on cell surface membranes cause the membranes to meld.  In the second stage, a pore opens between the cells and their contents merge.  This second step is guided by proteins inside the cells.

The work identifies two cell surface proteins that act at the start of myoblast fusion. These proteins belong to a large family of proteins called annexins.  Annexins are also known to play a role in membrane repair and in inflammation.

The researchers identified the protein dynamin, found inside the cell, as essential to the second stage of the cell fusion process.

“Dynamin also has an unexplained link to certain rare and poorly understood myopathies -- disorders characterized by underdeveloped muscles,” said Dr. Chernomordik.  “We hope that further examination of the role of dynamin in cell fusion will lead to a greater understanding of these conditions.”

The research article upon which the release is based can be downloaded free of charge at https://rupress.org/jcb/article/200/1/3/37111/The-two-stages-of-cell-fusion