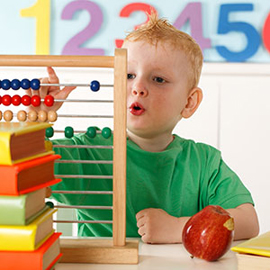 The study, appearing in Pediatrics, was conducted by scientists at the NIH’s Eunice Kennedy Shriver National Institute of Child Health and Human Development (NICHD).

“The previous U.S. studies in this area have focused on the mothers’ pre- and post-pregnancy weight,” said the study’s first author, Edwina Yeung, Ph.D., an investigator in NICHD’s Division of Intramural Population Health Research. “Our study is one of the few that also includes information about fathers, and our results suggest that dad’s weight also has significant influence on child development.”

Dr. Yeung and her coauthors cited research indicating that about 1 in 5 pregnant women in the United States is overweight or obese.

In the study, authors reviewed data collected from the Upstate KIDS study, which originally sought to determine if fertility treatments could affect child development from birth through age 3. More than 5,000 women enrolled in the study roughly 4 months after giving birth in New York State (excluding New York City) between 2008 and 2010. To assess development, parents completed the Ages and Stages Questionnaire

after performing a series of activities with their children. The test isn’t used to diagnose specific disabilities, but serves as a screen for potential problems, so that children can be referred for further testing.

Children in the study were tested at 4 months of age and retested 6 more times through age 3. When they enrolled, mothers also provided information on their health and weight—before and after pregnancy—and the weight of their partners.

It is not known why parental obesity might increase children’s risk for developmental delay. The authors note that animal studies indicate that obesity during pregnancy may promote inflammation, which could affect the fetal brain. Less information is available on the potential effects of paternal obesity on child development. The authors added that some studies have indicated that obesity could affect the expression of genes in sperm.

If the link between parental obesity and developmental delays is confirmed, the authors wrote, physicians may need to take parental weight into account when screening young children for delays and early interventional services.