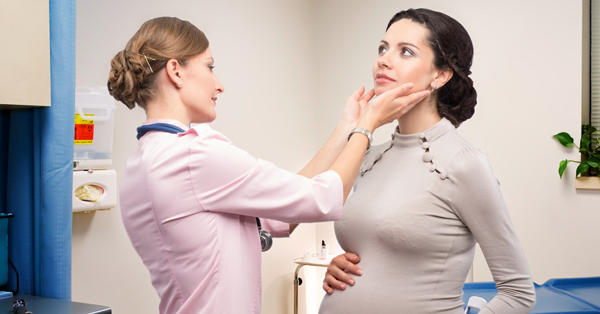 Women in early pregnancy who have high levels of a certain thyroid hormone may be at greater risk for gestational diabetes, compared to women who have normal levels of the hormone, according to researchers at the National Institutes of Health. Their study appears in the Journal of Clinical Endocrinology and Metabolism.

The researchers found that pregnant women with the highest levels of the thyroid hormone triiodothyronine (T3), were more than four times more likely to develop gestational diabetes, compared to women with lower levels of the hormone. T3 is produced from the related hormone thyroxine (T4). The researchers also found that a high T3/T4 ratio—which indicates a high conversion rate from T4 to T3—was strongly associated with a higher risk for gestational diabetes.

To conduct the study, researchers evaluated medical records of 107 women with gestational diabetes, comparing them to 214 pregnant women who had not developed the condition. The women had taken part in the NICHD Fetal Growth Study, a diverse sample of more than 2,300 participants. The authors note that abnormal thyroid functioning has been linked to miscarriage and preterm birth. Their findings suggest that screening pregnant women for thyroid disease early in pregnancy could help identify women at high risk for gestational diabetes and other pregnancy-related complications.

Cuilin Zhang, M.D., Ph.D., senior investigator in the Epidemiology Branchat the Eunice Kennedy Shriver National Institute of Child Health and Human Development, is available for interviews on this study.

Rawal, S. A longitudinal study of thyroid markers across pregnancy and the risk of gestational diabetes. Journal of Clinical Endocrinology and Metabolism. http://dx.doi.org/10.1210/jc.2017-02442