Podcast: Menstruation as a Diagnostic Tool for Women’s Health 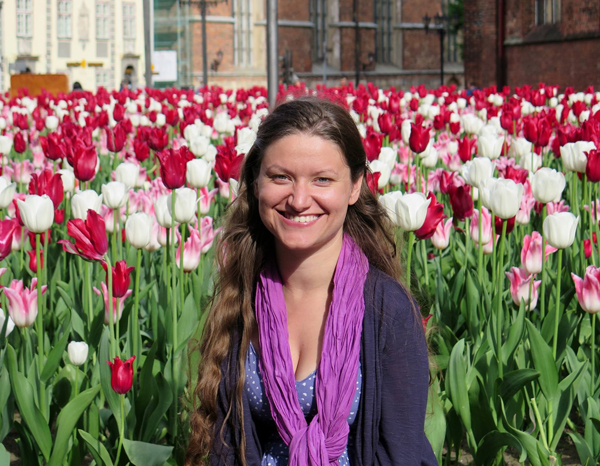 Welcome to milestones a podcast featuring research and insights into Child Health and Human Development.

We’re speaking about menstruation – that time each month when a woman's body sheds the blood and tissue that builds up in the uterus. Researchers are finding new ways to understand women's health by studying menstruation not only in terms of timing and effects but also by examining cells in menstrual blood for signs of disease.

Here to talk to us about the possibility of using a woman's menstrual cycle as a diagnostic tool is Dr. Candace Tingen, a program officer in NICHD’s Gynecological Health and Disease Branch.

Dr. Tingen, thanks so much for joining us.

Dr. Tingen: Thanks for having me.

Ms. Daly: So, let me just start with the basics. The menstrual cycle is not exactly new. It's been around, but what is new is the technology, right, that allows researchers to really get a better understanding of how to use the menstrual cycle to understand women's health?

Dr. Tingen: Right, right. We can ask questions in science that we could have never dreamed of before. So, we can actually in science sequence the entire set of your D.N.A., every single base pair, and see how that affects your health. We can also now look at a single cell and look at the D.N.A. or the R.N.A. or the proteins from that single cell. So, we're really able to hone in and to ask questions about very specific types of cells and types of tissue that we couldn't ask before

Ms. Daly: Your branch sponsored this conference a couple of months ago looking at the science of menstruation. Tell us a little bit about that. What was the point of the gathering?

Dr. Tingen: What we wanted to do was to bring people from really diverse fields of studying menstruation together in a room. So, we had people who study the very nitty gritty, the D.N.A., R.N.A. of the uterus, of the uterine endometrium, which is that lining that gets shed every month. So, there are the strict biologists. Then we have people who are evolutionary biologists. We have people who were in nonprofits on the ground distributing reusable cloth pads to girls and women who wouldn’t be able to go to school without these items. So, we have clinicians in the, you know, in the clinic who are researching patients who have heavy menstrual bleeding and seeing how that affects their health. So, we wanted to bring people from all of these different fields together, get them in a room, have them speaking the same language, so we can basically ask the question: What does menstruation tell us about health? What does it tell the patient themselves, the woman herself? What does it tell a clinician, a doctor? What does it tell scientists and what can we learn from menstruation in all these different fields? We really are in a realm now where we can take the blood and the tissue that is released from the uterus, you know, on a monthly basis and we can do things like diagnose endometriosis to a certain degree. So, what the science right now is developing is are these diagnostics wherein you look at the cells. So, for in endometriosis, for example, so that's when the uterine lining, it usually grows within the uterus, [but] in endometriosis, it grows outside of the uterus. It can grow on ovaries or on the abdominal wall.

But what we're learning is that the cells that are shed every month in the menstrual blood, in the tissue, are different between women who have endometriosis and women who don't. Those cells also act differently. So, a scientist can take a blood collection, just menstrual blood, can take those cells out, look at what kind of cells they are and how they behave in a petri dish and from that can say this woman probably has endometriosis or this woman probably doesn't. So, it's a really phenomenal, you know, emerging possibilities for using tissue that, you know, had been wasted, had been lost, you know, had been thought as unimportant, but using it as a way to diagnose some of these conditions.

Ms. Daly: And tell me, I understand there's something called a smart tampon. How does that work?

Dr. Tingen: So, the idea now is just that that tissue is so valuable, it actually is important, it's not something we want to waste. So, a smart tampon or a smart pad or a smart collection device just collects that tissue in a way that it's usable for the scientist or the clinician. But kind of the pie in the sky idea, you know, the 10-20 years from now idea is, what if we had a sensor in that pad or in that tampon? And that detects hormone changes or that detects those cells that we were looking for for endometriosis diagnosis. And what if that sensor was linked to a woman’s cell phone? So, what if when she has a tampon in or she removes it and you know somehow activates this app, then it tests for those cells those endometriosis cells or hormone change that says, you know, now `now you are on the way to developing endometriosis,’ or something like that So the potential is really, it's really interesting and I just think the idea of using this tissue is you know just really phenomenal.

I just I think that there's, you know, worldwide there really is still this existing taboo and this existing stigma that that menstruation is somehow dirty, or you know taboo, something not to be discussed. You know there are places in the world where women during their menstrual cycles have to go out into a shed in the woods with snakes and wildlife and you know dangerous situations all because menstruation is considered dirty, it's considered even sometimes evil and so I think just getting over that stigma and having women understand that it's an absolutely natural process. It is as biologically natural as breathing and it's absolutely nothing that needs to be you know too shameful to talk to your doctor about. You know for example we were talking about endometriosis diagnosis and one of the reasons that endometriosis diagnosis currently has a delay of about 10 years. So, women suffer for 10 years before they find out that they have it and it's because of that stigma because they're you know they're too worried to talk about to their doctors about it. They're afraid that it, you know, it sounds bad or it sounds gross. But I think the meeting itself and the conversation you and I are having are trying to bring to the forefront that it’s not, that it's natural, and I do think that technology, especially if it is something so easy that you know in our pocket – we can track our menstrual cycles, we can track how heavy they are – you know, then it becomes it becomes very relevant to our everyday life and it's something that we're talking about already, and it's something that becomes very easy to talk to our doctor about.

Ms. Daly: How can research help change this public perception?

Dr. Tingen: Research itself would show how important the process is, right, so if menstruation becomes not just – oh my goodness, I have to go buy pads, I have to buy tampons, I hope I'm not bleeding through my white pants – you know, if it becomes, ‘Listen, I am right now producing something that could tell me whether I'm healthy or not,’ you know, whether me tracking my pain or my symptoms could really be an insight into my health.

Dr. Tingen: Right, it becomes really valuable and it becomes, you know, a process to pay better attention to. So, I think in that way understanding the science and understanding the potential of the science and of this tissue and of these cells would really kind of bring it to the forefront of women's minds in a different way, you know, make it a valuable instructive process every month.

Ms. Daly: I’ve been speaking with Dr Candace Tingen, who is with NICHD’s Gynecological Health and Disease Branch. Thanks for listening to another episode of Milestones. I'm your host Meredith Carlson Daly.