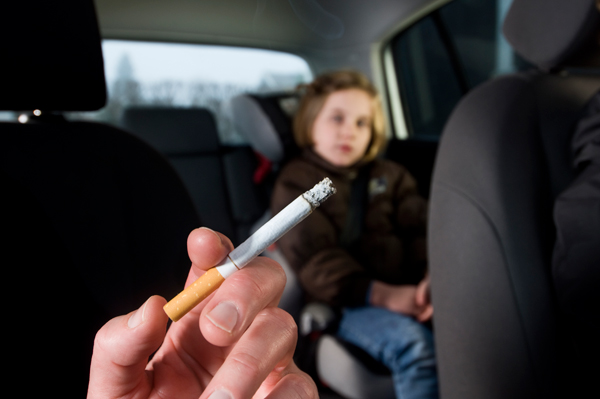 Infants and toddlers in low-income, rural areas may be at higher risk for second- and third-hand smoke than previously reported, according to a study supported by the National Institutes of Health. Approximately 15 percent of children in the study tested positive for cotinine, a byproduct formed when the body breaks down nicotine, at levels comparable to those of adult smokers. About 63 percent of children in the study had detectable levels of cotinine, suggesting widespread exposure to smoke. The study appears in Nicotine & Tobacco Research.

“Few studies have explored the risks of very young children, especially infants, for second- or third-hand exposure to smoking,” said James A. Griffin, Ph.D., deputy chief of the Child Development and Behavior Branch at NIH’s Eunice Kennedy Shriver National Institute of Child Health and Human Development (NICHD), which funded the research. “The current study suggests that moving frequently, having more adults in the home and spending less time in center-based daycare facilities may increase a child’s exposure to smoke or smoke residue.”

The researchers analyzed data from the Family Life Project, a long-term study of rural poverty in North Carolina and Pennsylvania. For the study, saliva samples of 1,218 children were tested for cotinine. The samples were collected from children at age 6 months, 15 months, 2 years and 4 years. The presence of cotinine indicates that the child was exposed to second- or third-hand smoke. Second-hand smoke comes from a lit tobacco product, an electronic smoking device or the smoker. Third-hand smoke is an invisible residue from smoke that settles onto floors, furniture and clothing.

The researchers classified the children into three groups based on their cotinine levels. Fifteen percent of the children were in the high exposure group, with cotinine levels comparable to active adult smokers (12ng/mL or higher), 48 percent were in the moderate exposure group (0.46 to 12ng/mL) and 37 percent were in the low exposure group (less than or equal to 0.46ng/mL). These values are higher than those seen in data previously reported in the National Health and Nutrition Examination Survey, which found that only one-third to one-half of children’s blood samples had detectable cotinine.

“We found that infants had higher cotinine levels compared to toddlers,” said Lisa M. Gatzke-Kopp, Ph.D., a professor at Pennsylvania State University and the lead author of the study. “Because infants often put objects into their mouths and crawl on floors, they may be more likely to ingest smoke residue or get it on their skin, compared to older children.”

The study team evaluated independent factors that may influence a child’s probability of being in one of the three exposure groups. They found that lower income, less education, frequent residential moves and fluctuations in the number of adults within the home were associated with high smoke exposure, whereas time spent at a center-based daycare was associated with lower smoke exposure.

“Our results, if supported by future studies, can help educate parents and caregivers, as well as improve prevention programs that seek to reduce children’s smoke exposure,” said Clancy Blair, Ph.D., M.P.H., a professor at New York University's Steinhardt School of Culture, Education and Human Development and the senior author of the study. “For instance, nonsmoking families may not be aware that nicotine can be present in their child’s environment if their home was previously occupied by a smoker or if smoking is permitted at the workplace.”

Funding for the current analysis was provided by NICHD, the National Institute on Drug Abuse, and the Environmental influences on Child Health Outcomes (ECHO) program, all part of NIH.