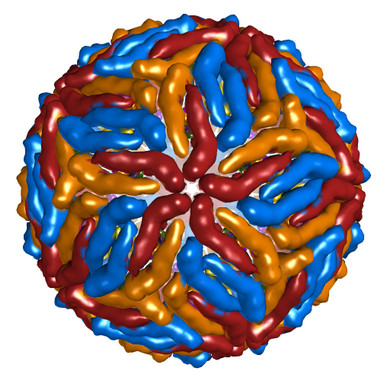 The severity of birth defects caused by Zika virus infection may be influenced by natural variations in a pregnant woman’s genes for a key enzyme, according to a study by researchers at the National Institutes of Health, Uniformed Services University of the Health Sciences, Federal University of Rio de Janeiro, and Professor Joaquim Amorim Neto Research Institute in Campina Grande, Brazil. The enzyme, adenylate cyclase, is required to make cyclic adenosine monophosphate (cAMP), which plays a role in placental development and other cellular processes, including the immune response to infection. The findings appear in the Journal of Internal Medicine.

The study enrolled 52 women who had given birth after testing positive for Zika virus infection. Of these women, 28 gave birth to children with reduced head size and other Zika-related birth defects; infants born to the remaining 24 women did not appear to have any Zika-related effects. After sequencing genes from the women, the researchers found that mothers of severely affected infants were more likely to have variations in two genes essential for making adenylate cyclase, ADCY3 and ADCY7.

The variation in ADCY3 has previously been associated with higher levels of adenylate cyclase, leading to higher levels of cAMP. The researchers believe higher cAMP levels could stimulate reproduction of the virus. Similarly, a variation in ADCY7 has been linked to lower levels of cAMP, which could protect against the virus’ effects. The authors note that, because of the relatively small number of women studied, additional research is needed to confirm these results. However, future research on drugs that influence cAMP production might yield potential therapies that protect against Zika exposure during pregnancy.